It would be hard to associate zen philosophy with Mies van der Rohe, even harder to associate it with the German Pavilion in Barcelona. Nevertheless, the latest work by American artist Spencer Finch, Fifteen stones (Ryōan-ji), precisely establishes that connection with the iconic pavilion.

Spencer Finch was the latest artist invited to intervene the Fundació's pavilion. With the aim of "provok[ing] new looks and reflections through [his] intervention in the Pavilion, [he] enhanced it as a space for inspiration and experimentation for the most innovative artistic and architectural creation." Finch joined a prominent team of artists and architects, including SANAA, Jeff Wall, Ai Wei Wei, Enric Miralles, Andrés Jaque, and Anna & Eugeni Bach, among others. 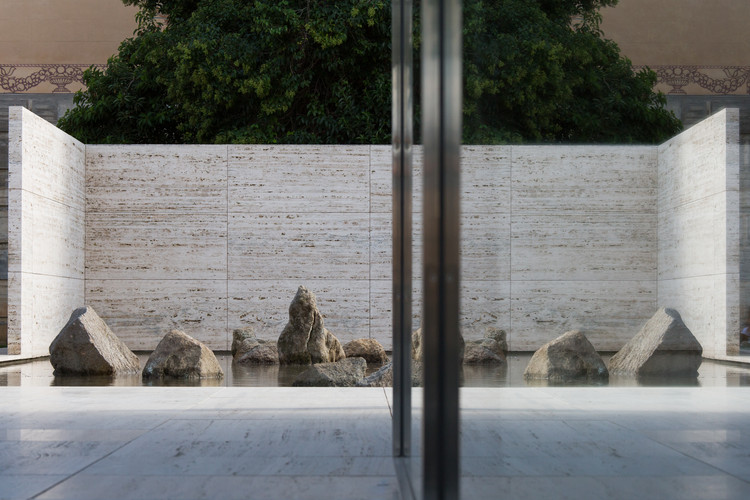 According to the Fundació, Ryōan-ji, "the temple of Dragon’s rest," is located in Kyoto, Japan. The intervention of Spencer Finch evokes its famous karesansui (zen garden), considered a masterpiece of Japanese culture. On a white gravel surface of 25x10 meters, fifteen stones are arranged in such a way that it is not possible to see all of them at the same time. This abstract composition encourages meditation, is open to interpretation, in the same way that Fifteen Stones is."

"This intervention allows us to reflect on the most lyrical aspects of the work of Mies van der Rohe and one of the most outstanding materials of the Pavilion, the stone. In its natural state, it establishes a dialogue with the travertine cut, polished and hanging, it forms the walls, pavement, and the bench from which the composition is observed," wrote the Foundation on a press release.

Regarding his intervention, Spencer Finch says:

The Ryōan-ji Garden in Kyoto and the Mies van der Rohe Pavilion in Barcelona are two of my favorite places in the world. In spite of their many differences, to me they are incredibly similar, in terms of how they generate thought about being a human seeing and moving through space.

The project can be seen until October 21 at the Mies van der Rohe Pavilion. Fifteen Stones (Ryōan-ji) is part of the Swab Barcelona Art Fair, the Barcelona International Biennial of Landscape Architecture, the 'Ciutat Oberta' Thought Biennial and is listed in the Barcelona Gallery Weekend agenda.