Save
Adjaye, MASS Design Group and Shonibare Among 5 Finalists for Boston's MLK Memorial
Share
Or
Copy

Nonprofit MLK Boston has released the final five designs for a monument to civil rights leaders Martin Luther King Jr. and Coretta Scott King. The finalists include a range of offices like Adjaye Associates, Maryann Thompson Architects and MASS Design Group, as well as artists like Yinka Shonibare, Barbara Chase-Riboud and Walter Hood. As reported by Curbed Boston, the city is working with MLK Boston to make the monument part of a larger initiative that includes an educational center in Roxbury and $1 million endowment for programming related to the Kings. 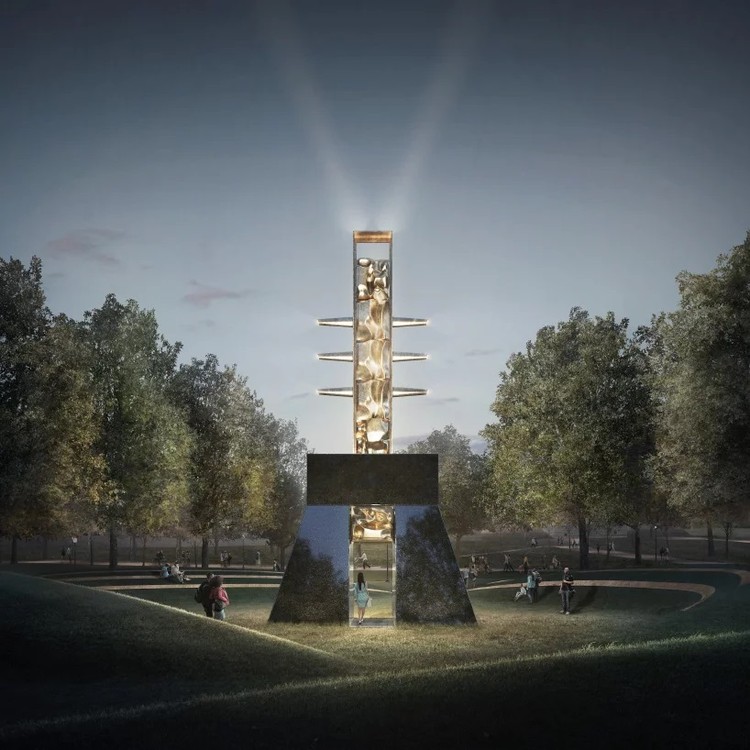 The five final designs will be on display at the Bolling Municipal Building in Roxbury’s Dudley Square and the Boston Public Library in Copley Square until October 16. The designs are made to reshape the experience of America’s oldest public park. As Mayor Marty Walsh has said, “Each one of these five proposals does a tremendous job of honoring Dr. Martin Luther King, Jr. and Coretta Scott King and their ideals, teachings and values. I look forward to hearing the public’s response to each proposal, and gathering their feedback on which project best exemplifies the profound impact the Kings had on the City of Boston.” The final design is set to be selected in November.

Artist Adam Pendleton joins architect David Adjaye, independent graphic designer David Reinfurt, and international cultural partnership Future\Pace to create a proposal informed by Dr. King’s ﬁnal speech, “I’ve Been to the Mountaintop.” The memorial is an overlook in black stone, projecting out from Beacon Street to embrace and overlook the Common below. From the summit of the memorial, visitors are invited to regard America’s oldest city park and new mountainous sculptures below, which together compose a radical amphitheater. On the lawn are sloped stone sculptures engraved with the words of the Kings that act as terrain and provide seating.

Architecture practice MASS Design Group joins conceptual artist Hank Willis Thomas to create “The Embrace,” a mirror finish bronze memorial about bringing people together. The design includes 22-foot-high arms of Dr. King and Coretta Scott to remind passersby of a shared human connection. The memorial will envelop participants, allowing them to be simultaneously vulnerable and protected. By highlighting the act of embrace, this sculpture shifts the emphasis from singular hero worship to collective action, imploring those curious enough to investigate closer. A wall bearing the iconic image that inspired the Embrace will accentuate the exterior facade and mark the gateway to Dudley Square.

Cambridge-based partnership Wodiczko+Bonder joins the architecture practice of Maryann Thompson Architects and urban artist Walter Hood for their proposal, “The Ripple Effects: Resonance of Voices, History, Love and Action.” The design includes Beacon Towers to symbolize the continuing presence, inspiration, and impact of the Kings’ moral and social leadership. Emanating from the Beacon Towers are ripples that evoke the “ripple effect” of the words, actions, and leadership of the Kings. The Mound creates a journey “to the mountaintop” culminating in a deliberately empty and shaded platform conceived to bring into being a public community of engaged visitors. The “bridge” leading from the 54th Memorial across the Common past the Beacon Towers is inscribed with a chronology of emancipatory events.

Abstract artist Barbara Chase-Riboud created the “Empty Pulpit Monument” as a dedication to Martin Luther King Jr. and Coretta Scott King. Made of light, stone and bronze, the design features a truncated stone pyramid representing the pair's mission and collaboration. Atop, a searchlight beacon represents their message from the top of the mountain they climbed together. The memorial is inspired by a 17th-century wooden pulpit, resembling that of the first Martin Luther and symbolizing MLK Jr.’s silenced voice. The Indian granite serves as homage to Gandhi’s non-violence movement and inside the passageway is engraved a historic lineage of the diaspora. A series of “waves”, green rolling hills where the public can roam, will surround the memorial. Additional quotations from the Kings will be emblazoned on bronze plaques embedded in the hills.

Yinka Shonibare is an artist with work that explores issues of race and class through the media of painting, sculpture, photography, and film. Titled the Avenue of Peace, his design with Stephen Stimson Associates is a memorial walkway, sculpture, and water feature. The interactive memorial was made to engage the public with the story of the Kings’ lives and mission through 22 inscribed benches and an app that visitors can download. The public is invited to journey along the avenue and sit on the stone benches lining the walkway to learn about the couple and their histories. Toward the center of the avenue will stand a tall fountain covered in colorful mosaic, set in the middle of a continuous oval pool lined with black granite. The mosaic design incorporates the couple’s names alongside olive branches that will remind viewers of peace. 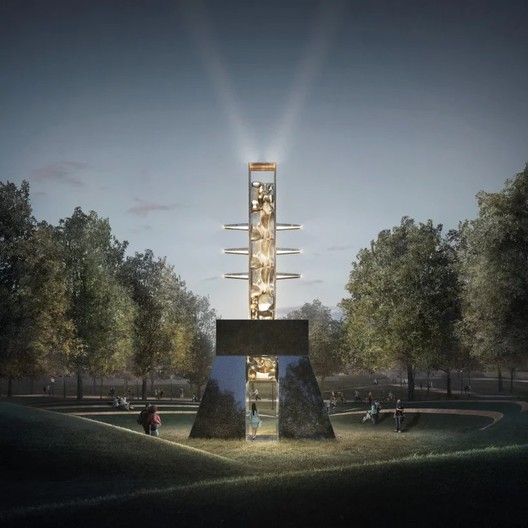