French architects USUS Architectes reinvent the typical campground by designing a modular multipurpose structure as an ecological bivouac along the trekking routes in Massif Central, France. Together, the Association of Natural Parks of the Massif Central (IPAMAC), PNR Livradois-Forez, PNR Millevaches in Limousin, and the International Center for Art and Landscape (CIAP) wanted to tackle the lack of suitable accommodation along the trails. After deliberating from over 64 proposals, the agencies ultimately selected Peaks + Simon BOUDVIN and USUS + Zebra3 as project co-laureates of the competition. 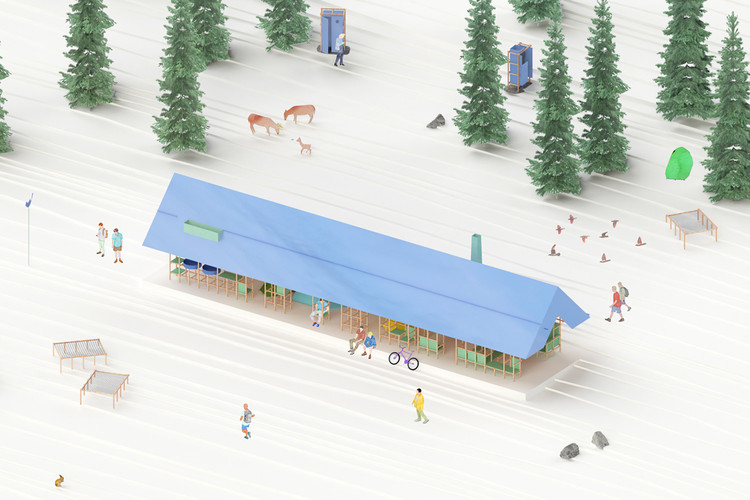 To accommodate the various uses of the bivouac, the three-dimensional wooden structure integrates portable elements such as seats, tables, storage, screens, basins, a fireplace, and more, essentially allowing the user to alter the arrangement as per their needs. However, the real playfulness of this tectonic system lies in the way that one can lengthen, shorten or fragment the frame-furniture itself.

Deploying a rigid module strategy to create the structural grid, the architects augment the interests in prototyping and iterative design techniques. The structure is sheltered by a large roof, though left open along all sides so as not to hinder the mountain views. Its simplicity blurs the lines between the indoors and outdoors within the natural environment, rather than enclosing hikers within a cabin-like space.

Amidst the picturesque location in Limosin, the design offers a creative yet feasible solution to reshape the trekking experience.