Artist Janet Echelman has unveiled her latest site-specific work of public art, with the activation of the first phase of “Pulse” in Philadelphia’s Dilworth Park. Pulse seeks to reshape urban space “with a monumental, fluidly moving sculpture that responds to environmental forces including wind, water, and sunlight.

Inspired by the square’s history as a water and transportation hub, Echelman’s work traces the paths and trolley lines of the subway beneath, with four-foot-tall curtains of colorful atomized mist traveling across the park’s fountain surface in response to passing trains underneath. 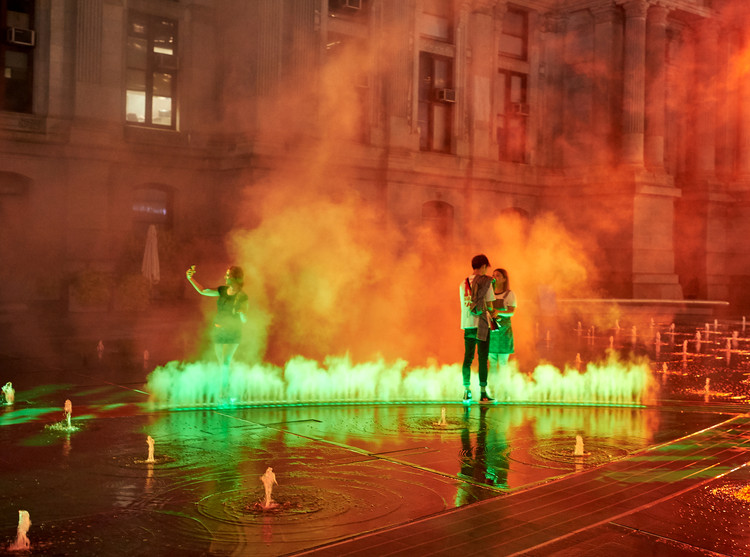 Following the footprint of passing subway trains, “Pulse” emits an ultra-fine, fog-like, cool mist by way of a high-pressure misting system of specialized pumps. To make the installation accessible to children, “Pulse” uses a mist made of filtered, softened water, onto which lighting is projected.

Described by Echelman as “a living X-ray of the city’s circulatory system,” Pulse makes heavy reference to the site’s history. The rising steam evokes both the city’s first water pumping station, and the steam from the adjacent historic Pennsylvania Railroad Station, merging a celebration of history with future-looking cutting edge technology.

I’m thrilled to see Pulse come to life – my first permanent artwork using cool mist with colored light. When I started work eight years ago, this was a forlorn plaza. So it’s especially exciting to see the colors come alive in this beautiful park. The art traces layers of Philadelphia’s history of water with water. With the successful opening of this first phase, I feel great momentum towards completion of the blue and orange lines to activate the entire park.
-Janet Echelman