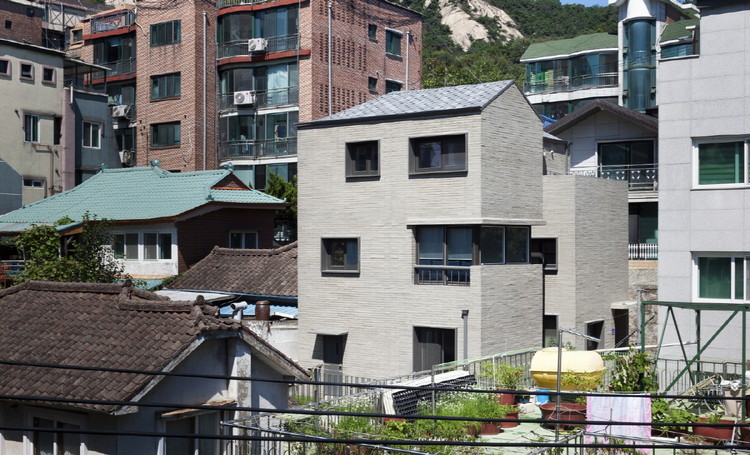 Text description provided by the architects. Nusang-dong is located in the western part of Gyeongbokgung Palace, built in the old Joseon Dynasty. This is a district commonly known as Seocheon. There must have been a pavilion(‘Nu’) there, since the name means ‘an area above pavilion.’

The thick rocks of Inwang mountain support the village like bolsters. Famous poet named Yoon, Dong-ju and a painter Lee Jung-seop lived here. They may have lived here briefly, but nevertheless it is a piece of history which the local Jongno-gu Office is eager to promote. A young couple came to us to build a house in this area. Mother in law was helping to raise their child because the couple both worked. In Korea, three generations often live together for child- care, which means the key to design is to secure each generations’ independence.

We separated each generation by a vertical split and set separate entries for each, then created a shared space in-between. This scheme caused friction with the administration office since they insisted that the house should be interpreted as a multiplex house, not a single house. (Eventually solved by numerous visits).

Like many towns in the old northern Seoul, the surrounding area is filled with houses along narrow, winding paths like blood vessels. Old style houses are often left among the dense multiplex houses. When we went to site, we found an empty land that had already been emptied, devoid of any trace of the old house.

The road leading to the site was too narrow for automobile’s access. This would cause extra work in the construction phase. There were also stairs on the access path, and not much traffic. This gave us an idea to use the leading alley to the site as an extension of court-yard(madang). The design scheme needed to incorporate issues of two generations coexisting in a single house, an island-like geographical location and a narrow alley.

The alley was always kept quiet and there was a very large mountain behind the site, but the view was blocked by many surrounding buildings. The nearby multiplex houses have a very common and boring facade like any other old residential areas in Seoul, mostly finished with lame red bricks or granite.

In a case like this, colorless materials are essential. It is moderately intense and moderately emulsifying. It doesn't reveal itself vibrantly, but has an inert power. So we decided to create a gray space with concrete tiles. Gray space means material, but it also signifies the nature of space. It is an intermediate space that is not classified in black or white, while it is ambiguous. Interpretation of overlapped family programs.

From the shape of the long, narrow site, we drew a ‘ᄃ’ shaped plan to make space for a small court-yard. The residential functions are located in the east and the south wing, allowing as much natural light as possible, and service functions like kitchens and toilets are to the west wing. The courtyard is seamlessly connected to the alley, allowing expansion of outer space.

Since the lot is small, each unit space is designed to fit the required function perfectly like a custom suit. A mother's quarter was placed on the first floor, a couple's bedroom on the second floor, and a living room and kitchen on the third floor. The courtyard is naturally on the ground floor with the terraces on the second and third floor. On the third floor terrace, a view to the disheveled cityscape slowly encroaching solid Inwangsan Mountain is available for the occupants. 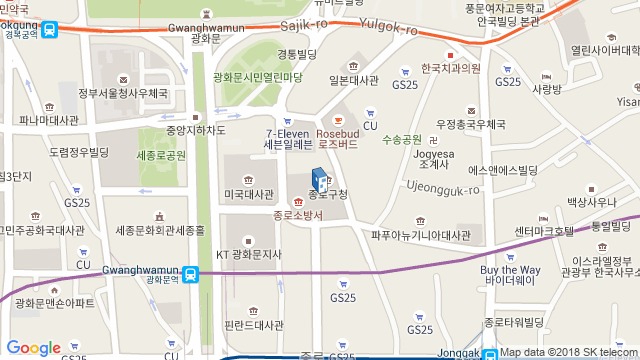