Bjarke Ingels Group has received approval for their King Street West condo community in Toronto. Originally proposed in 2016, the development was made as sets of pixels extruded upwards to create space for housing, retail and boutique offices. The concept was formed to avoid the footprints of heritage buildings that already exist on site. Alex Bozikovic, architecture critic of The Globe and Mail, reports that the development is about to start sales as King Street West pushes past its latest development hurdle.

King Street West is set in a transitional area of Toronto. Located at the meeting point of three 20th century neighborhood parks, BIG, Westbank and Allied Properties REIT proposed a mixed use development with a public plaza that will create a new center for the community while connecting the various pedestrian pathways that crisscross the area. The building is organized as a traditional perimeter block with a public plaza in the center. Surrounding the plaza, King Street West rises as sets of pixels, each pixel set at the size of a room; rotated 45 degrees from the street grid to increase exposure to light and air.

The project features a distinct undulating façade to create additional green space. "With King Street West, we wanted to find an alternative to the tower and podium you see a lot of in Toronto and revisit some of Safdie's revolutionary ideas, but rather than a utopian experiment on an island, have it nested into the heart of the city. It would be strange if one of the most diverse cities in the world had the most homogenous architecture." Bjarke Ingels, Founding Partner, BIG. 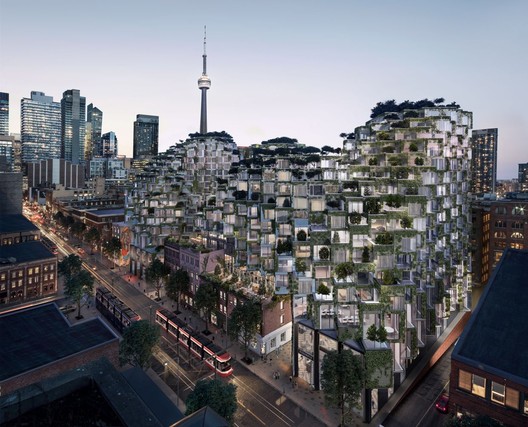