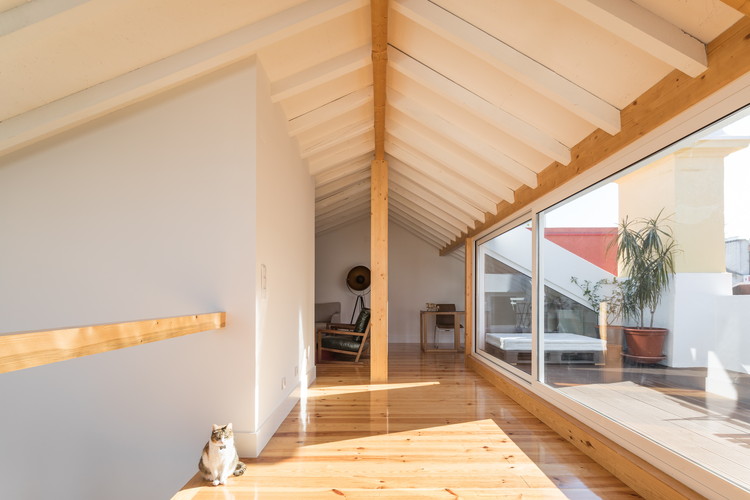 Text description provided by the architects. The apartment is located in a drawer building built in 1914, located in the traditional neighborhood of Campo de Ourique. The building has a late Pombaline construction, with the exterior walls in mortar stone and the interior walls in wooden structure. It has a very strong presence at the intersection due to its simplified but careful design facade and a rather high rooftop, which hides the presence of the two-story tile roof.

The building has a left-right typology, and we deal with occupies about two-thirds of the floor area on the top floor. It is a typical apartment of this historical and constructive period, with a long interior corridor that distributes to several compartments of very similar dimensions, orientated to the West. At the end of the corridor is the kitchen (with a span to the east) and also access to the only bathroom. The two-storey penthouse with a ceiling of 2.70m at the highest point was not habitable. Its construction consisted only of poor wood flooring covered with tile, which made the rooftop apartments thermally very uncomfortable.

What we proposed to our clients was to extend the apartment, since they would be the only ones with the possibility of accessing it. After this programmatic transformation, we aimed to increase the light inside the apartment, since the house only received it from the afternoon. This strategy materialized in the introduction of two roof terraces - one orientated to the East-South quadrant and another oriented to the North-West quadrant.

These terraces also work, along with the skylight of the main staircase of the building, as organizational elements of the upper floor space - a multipurpose open space and a master suite. The strategy of creating terraces (subtraction to the geometry of the roof) rather than the rafters (addition to the roof) was taken so that, from the urban point of view, the presence of our intervention was the least intrusive, since from the street there can catch a glimpse of its presence.

The reorganization of the space on the lower floor was made so as to include a living room with double height, well lit by the presence of the two terraces. On this floor there is also a bathroom with access from the hallway, as well as the kitchen with adjoining dining area and two bedrooms.

The material strategy sought to preserve to the maximum the characteristics of the original building, with the existing wooden floor being recovered and the walls rehabilitated. On the top floor we assumed a new structure in pine wood, while the existing roof structure was maintained where possible and replaced where necessary. The floor of the upper floor, in solid wood floor of new pine, dialogs with the floor of the lower floor, one hundred years older, in an old-new dialectic that we wanted to assume. The kitchen and bathrooms, totally new, have been coated with microwaving, assuming their contemporaneity. 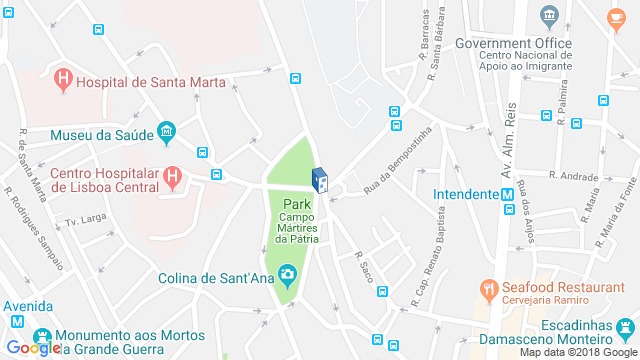