Moscow officials have approved a new supertall building that will become the city's tallest skyscraper. Rising 404 meters (1,325 feet) in height as part of the Moscow City commercial district, the tower is designed by Sergey Skuratov Architects. The unnamed structure will be a multifunctional residential complex with 109 floors. The new skyscraper will break Moscow's current tall building record set by Federation Tower at 373-meter-tall (1,226 feet) tall. Construction is scheduled to begin next year. 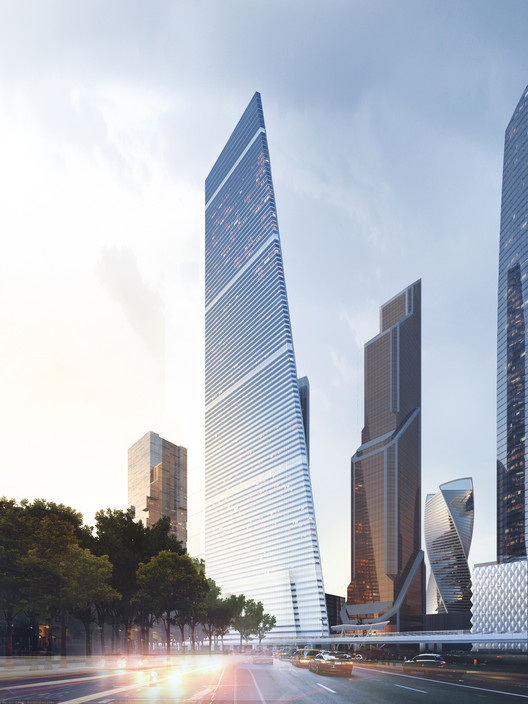 The new skyscraper joins a host of other superlative buildings in Moscow City, including five of the ten tallest buildings in Europe, all supertall structures.The district's Federation Tower currently holds the title of Europe's tallest completed skyscraper. Soon, it will be surpassed by St. Petersburg's Lakhta Center, which will rise 462 meters when complete in 2019. When complete, Skuratov's skyscraper in Moscow will become Europe's second tallest building.

Designed with two main volumes, the new supertall design includes a 12 story base structure with offices, a shopping center and a range of commercial facilities. Above, residences will rise to the 104th floor. Capped with a helipad, the project includes an observation at 399 meters (1,309 feet) above ground. The project's facade will feature a gradient of white glass between windows that disappears by the 80th floor. As Skuratov explains, "The plan of the building is an isosceles (trapezoid) 30 meters wide, truncated on one side, facing the Moskva River. The sloping edge on the west side of the tower follows the direction of one of the nearby streets. The other edge is vertical and points toward the center of Moscow."

Moscow's supertall is set to open in 2024. Read more about Sergey Skuratov and his work through our recent interview.