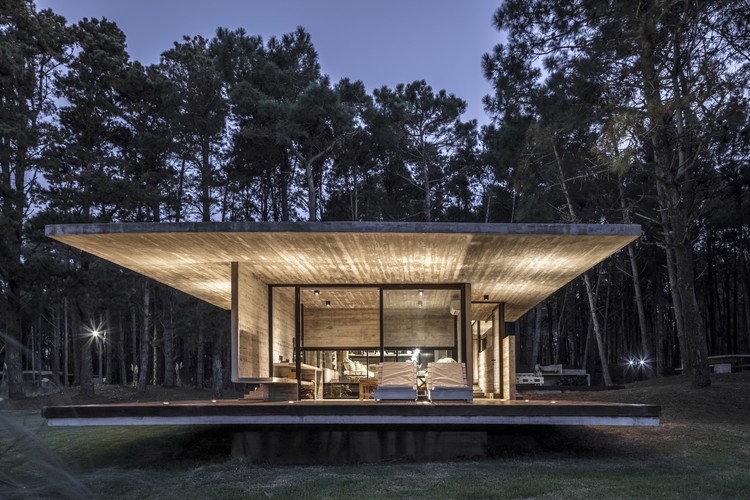 The Place
Costa Esmeralda is a private enterprise on the dunes of the Buenos Aires coast, located 390 km from Buenos Aires. It is a recent urbanization with a young afforestation of acacia trees and maritime pines and some sectors of consolidated forest. The site, with an extensive forty-five-meter front, belongs to the latter sector, so that the house had to incorporate this privileged landscape, while at the same time protecting its privacy towards the street. It was also necessary to consider that the dune it is part of has a slope of almost two meters overlooking the front and that, although its surroundings have a dense grove of trees, the land is only partially
covered with species.

The Commission
The commission was a house of no more than 150 sqm, with an aesthetic-constructive proposal similar to the other houses built in the area by the studio, valued according to the clients both for their spatial richness and for the low maintenance required. It had to have a generous meeting space, a visually integrated kitchen, two bedrooms (one with private bathroom) and an integrated living space to be used as an audio and video room and, eventually, as a guest bedroom. It should also have a grill and an expansion terrace.

The Proposal
It was then decided that the different uses would be naturally accommodated on the slope of the land, distributed in three volumes that would simplify the procedure. These volumes are staggered with a difference of 45 cm between them, giving place in this displacement to the formation of small courtyards that incorporate the surrounding landscape. This first decision was the trigger for successive operations derived from it: the first one was the rotation of the floor plan in relation to the sides of the lot in order to coincide with its natural slope. Hence, the alignment of the main axis of the house with the north-south direction and, as a consequence of the latter, the need to resolve the project with well-differentiated façades: the east side exposed to the gaze from the street with very controlled openings, and the west side with large openings protected by vegetation. The northern end of the building was designed as the culmination of the common space 2 with a large semi-covered balcony protected from the views from the street by the local pastures and with distant views of great scenic value.

The Functional Organization
The entrance was planned in the centre of the floor plan, i.e. at the midpoint of the slope and at the same level as the living/dining/kitchen area and the outdoor expansion. From there, a small flight of gently sloping stairs leads up to the most reserved area of the bedrooms, or descends to the living area to contemplate the landscape in front of the fireplace. The interior courtyards incorporate light, transparencies, reflections and vegetation into the rooms.

Structural Resolution and Construction
Two unique materials: concrete and glass, were used to solve the integration with the landscape and to respond to the formal, structural, functional, finishing and maintenance issues. The structural solution adopted was to cover each volume with a slab that rests on inverted beams that are intertwined working together throughout the house. From these beams, the slabs extend into large cantilevers. The roofs between beams were designed as green terraces to increase the thermal insulation, as they receive sun during most of the day. The few hollow brick interior partitions are finished in painted, hardened plaster. The floor is made of
cement smoothing cloths divided by aluminum planks. The openings are made of dark bronze anodized aluminum. The heating system, since there is no natural gas in the area, was solved with an electric under-floor heating system.

Furniture
Except for the beds, sofas and chairs, the rest of the equipment of this house is made of concrete. 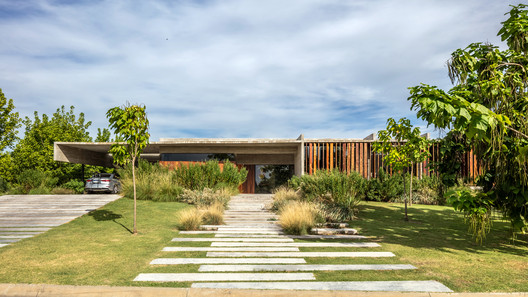 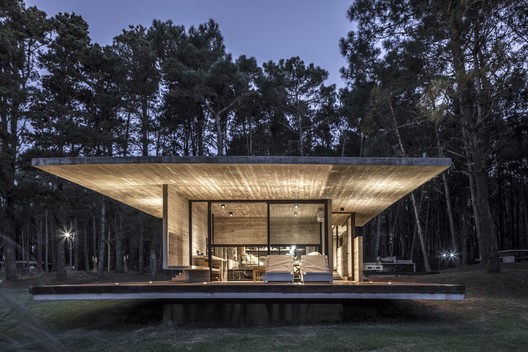