Save
The Screen House / The Grid Architects 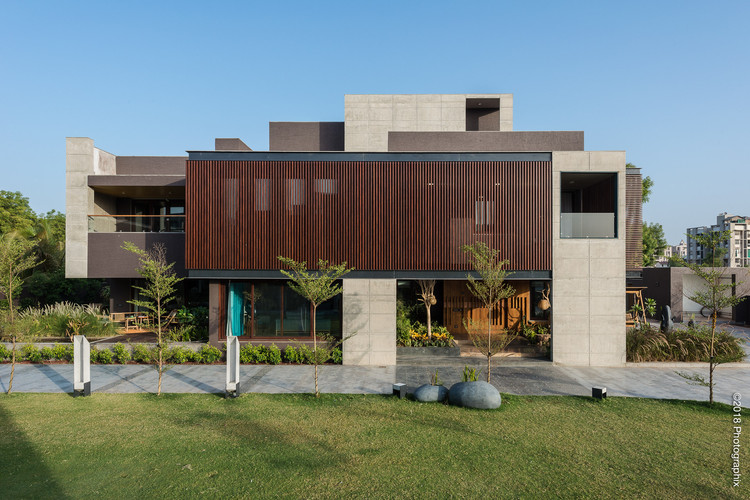 Text description provided by the architects. Screen House is a beautifully integrated development that houses a large family and various age groups. It comprises three discrete spaces, each one serving the needs of sub-sets of the unit, yet linked in spirit and design. The site is located facing north, with all other three sides abutting adjacent properties. Within this, the three main constituents — facing west, north, and east — are arranged in a C, encircling a central green courtyard that actually functions as a common space; an open-air living room. This is where the family congregates, to share stories, watch movies, read, and unwind.

The connectivity of the three homes is articulated by waterbodies, semi-open spaces, and vegetation; while sightlines have been maintained by selecting plants and trees (especially those of the central court) which are not too dense or will not become too tall. The individual homes were planned to keep in mind the size of the plot, sun path, family requirements, climate. The architecture explores the interplay of alliances between plant life, water, sky, built-form, and humans. The building comprises of sections interlocked with the functionality of the spaces to create a balanced whole.

Elevationally, all three structures see a prominent use of brise soleil in the form of screens — hence the name. The landscape was meticulously planned to seem natural, organic, with several waterbodies at intervals. For the architect, water plays a symbolic role. "It changes our relationship to space," he says. "It creates a reflection and adds an element of sensuality. Water symbolizes life.” The exposed concrete on the elevation is tautly balanced with the earthen color and screens. A basic, close-to-nature basic palette was selected — stone, wood, and concrete — which helped create a stable thermal mass.

During the day, the house takes on a very “private” appearance. A veil of timber screens, horizontal and vertical, wraps around the houses, protecting the façade and the main living areas from the harsh sun and heat of the climate of Ahmedabad. But at night, with the rooms illuminated within, the effect akin to a magical lantern. Everything was planned in rhythm: architecture, landscape, and interiors. Each house has a waterbody at the entrance porch and a personal sit out in the continuum. The intent was to keep the homes warm and welcoming, a house that always remains open.

A living space that merges with the garden, so that it almost becomes a part of it. The constant presence of water in every house infuses serenity. The screens protect and form a transparent curtain to the garden maintaining a visual connectivity between exterior and interior. A co-evolution which resulted in a coherent structure and style and expression maintaining architectural vocabulary. The interior is artistically composed and remarkably spacious. The orientation is to catch the breeze through balconies, verandas and wide overhanging/cantilevered eaves that would also provide requisite shade.

The interior programme clearly demarcates and segregates semi-private and private areas. Even beyond the main entry, a vestibule caters to casual visitors. After this, the programme unfolds via a passage leading, on one side, to the prayer room, kitchen and dining and patio, and, on the other, the guest room, elevator and staircase. The staircases of each homes are defined differently each a sculptural element on its own. The prayer room is a place for spiritual repose highlighted by daylight that penetrates from a skylight above.

The double-height of the indoor living room in conjunction with the green vista that unfurls through floor-to-ceiling windows furthers the ‘living in a garden’ endeavour. The dining rooms are also extended to a timber patio with a lily pond brimming with koi fish. Essentially, the ground floor living areas are conceptualized as an open space overlooking the landscape filled with biodiversity and water. In contrast, the upper level is private and houses three bedrooms, each one overlooking the central landscape, and featuring a generous ensuite and dressing–closet.

The development also shares several facilities such as a well-equipped gym and jacuzzi in the basement of a separate structure, an outdoor barbeque facility attached to a covered, fully-glazed gazebo, and a fire pit to cater to extending to the garden and water bodies. The selection of materials, meticulous attention to detail, modulation and movement of space planning and inculcating landscaping as part of the whole, are the hallmarks of this development. There is abundance of natural light and nature. The Screen House is an urban residence that embraces the community living culture. A quiet retreat amidst the bustle of the city.