Save
The Dazzling Modernist Cinemas of Southern India, Captured by Stefanie Zoche
Share
Or
Copy

Photographer Stefanie Zoche of Haubitz-Zoche has captured a series of vibrant images showcasing the “hybrid modernist” movie theaters of Southern India. The images below, also available on the artist’s website, capture the large number of cinemas built in both rural and urban areas of South India in the 1950s, 60s, and 70s, all conveying an “unconventional mix of local building styles and Western influences."

As Zoche describes, the colorful facades, “suggestive of theatrical sets, provide a foretaste of the cinematic experience in the hall itself, in which extravagant shapes and ornamentation are continued and put the viewer in the right mood for the cinematic world before the screening itself.” 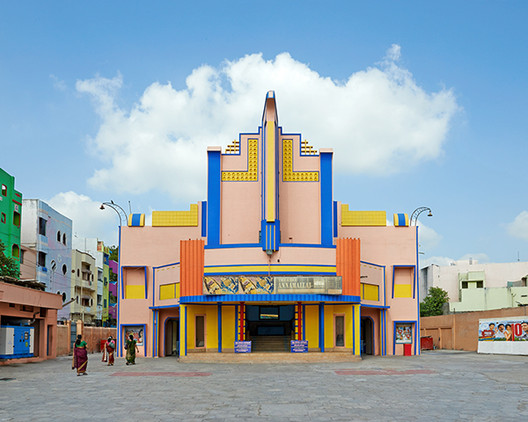 Zoche’s works, which you can explore on her official website here, are currently on show at the Zephyr, Reiss-Engelhorn-Museum Mannheim in Germany. Below, we have laid out some of the “Hybrid Modernism, Movie Theatres in South India” series, highlighting some of the cinematic delights of one of the world’s largest nations. Zoche’s other works include a gallery of the equally-flamboyant hybrid-modernist churches of Kerala in Southern India, which you can explore in our previous coverage here.