Oslo councilors have voted to halt the Snøhetta-designed “A House to Die In,” located in the grounds of painter Edward Munch’s former house and workshop in western Oslo. The recent vote, reported by Norwegian newspaper The Local would appear to put an end to the 8-year collaborative process between Snøhetta and Norwegian artist Bjarne Melgaard.

A House to Die In has become the most controversial building proposal in recent Norwegian history, due to its architectural form and how it honors the legacy of one of Norway’s most famous artists.

The scheme was designed by Snøhetta and Melgaard to be both a sculptural piece and a house for Melgaard and his parents. Throughout the near-decade-long design process, the scheme has gone through several interactions and placements, with Melgaard previously agreeing to move the house so that only the access road would encroach on public land.

While accepted by national and city conservation authorities, the new plans have been rejected by the city’s politicians who cited the project’s placement as their concern, rather than the architectural form.

We want the site where the death house was intended to be placed to remain a green area for the benefit of the local population, and we encourages Bjarne to find a new site for the project.
-Oslo City Council Statement

Reacting to the news, Melgaard told the Aftenposten newspaper “there is great opposition to new things in Norway.”

The scheme has generated much editorial discussion of late, with the The New York Times describing the building as a U.F.O. Earlier this year, the project was put on public display by the Selvaag Art Collection, showcasing the artistic process of designing the unique home.

You can read a deeper explanation as to why A House to Die In is one of Norway’s most controversial buildings in our recent coverage here.

News via: The Local, Norway 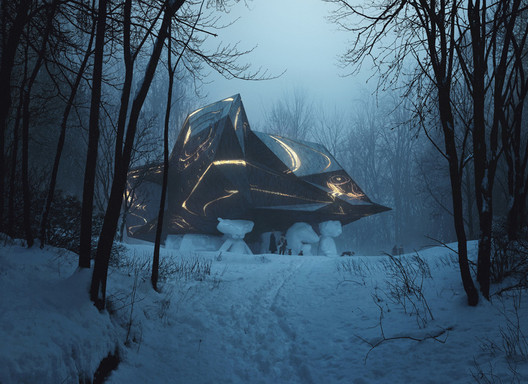