The result of an 8 year collaborative process between Snøhetta and Norwegian artist Bjarne Melgaard, “A House to Die In,” is now on display at a new exhibition Tjuvholmen in Oslo, Norway.

Organized by the architects and artist with Selvaag Art Collection, the exhibition shows the artistic process of designing the unique home and studio that is currently seeking approval for its construction. To be located on the grounds of painter Edward Munch’s former house and workshop in western Oslo, the sculptural proposal has prompted discussion over how it honors the legacy of one of Norway’s most famous artists.

“In collaboration with Selvaag Art Collection we want to tell a different story of how a building comes about. It is an exhibition about plunging into documents, models and drawings to understand the scope of an immensely interesting transdisciplinary collaboration that, in many ways, reflects our inner values as a firm,” says founding partner of Snøhetta, Kjetil Trædal Thorsen.

Read a description of the project below, and find a recent profile on the proposal and its criticism in the New York Times, here.

Description from the architects. It all starts in 2011 when the Norwegian artist, Bjarne Melgaard, reaches out to Olav and Frederik Selvaag with the idea of making a sculpture that would double as a house. Having a long tradition of supporting Norwegian artists, the Selvaag brothers adhere to the idea. Shortly after, Snøhetta gets involved in the project, and since then the artist and the architects have exchanged thoughts, drawings, 3D models and documents to design a house that will function as Melgaard’s private residence and atelier.

The Selvaag brothers suggest Kikkut, a plot that has been owned by the Selvaag family for decades on the west side of Oslo, as a good location for the Melgaard house. The choice of the plot comes naturally as the area is already an artistic hub thanks to its proximity to the art colony Ekely and Edvard Munch’s former home and atelier. Nothing has been built on the plot since the villa that used to adorn the plot was demolished in 1989. The Selvaag brothers see a good opportunity to realize an ambitious art project on behalf of an artist that they have followed for a long time.

The collaboration between Melgaard and Snøhetta stretches over several years. Through intense workshops and dialogue, the artist and architects exchange reflections about form and materiality. Melgaard draws hand sketches and hands them over to the architects who transform his two-dimensional, analogue drawings into digital models. The ambition is to imagine what hides “behind” the drawings, to interpret which three-dimensional forms could be found behind the physical piece of paper. With digital tools, the 3D models are shaped like a sculpture. The exercise of successfully translating art into architecture has officially begun.

Converting Melgaard’s art into architecture is a meticulous digital process. The work consists of shaping digital models consisting of a small-scaled triangular pattern. Snøhetta models selected Melgaard drawings before initiating a reduction process of the models to achieve buildable shapes. A large number of the triangles are then digitally removed from the 3D model, creating a rougher and more geometrical pattern. The façades of the house take shape. The house has become a physical, triangular wooden house resting on poles of white animal-shaped sculptures. For the first time, Melgaard’s art describes an architectural space and expression.

Melgaard’s drawings are projected back onto the geometrical façades. The colors translate into imprints that are cast back onto the façades. While subtle and translucent colors provide a light imprint into the façades, saturated colors break through the material entirely, inviting light into the building. For the first time, the architecture describes an artistic expression.

On the inside of the building, Melgaard’s artistic universe and home concept complement each other perfectly. While one of the rooms could function both as swimming pool and dining room, another could function as workspace and spa. These untraditional pairings are a direct symbol of how conventions are prevented from influencing the building’s usage or design. The building is clad with black, burned oak, inspired by Japanese building traditions. The burnt oak will naturally erode over time so that the building gradually changes character throughout the years and seasons. A shallow water pond below the building creates an illusion of a «floating» building. 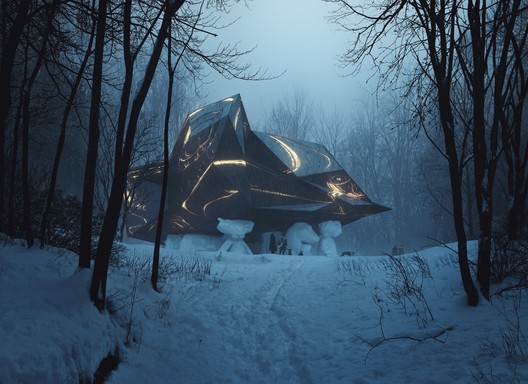