Prioritizing formal symmetry, balance, and order, the models aim to evoke “a sense of visual equanimity” through a restrained palette of neutral or monochromatic tones. 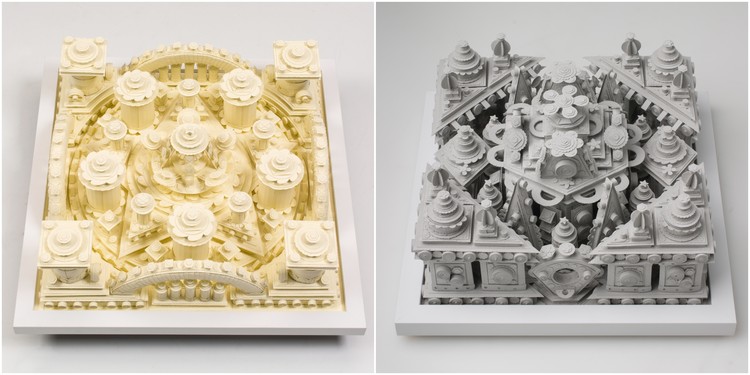 Velliquette’s website documents his latest series among other noted works, including his New York City public commission “Sparkle Vision City” in 2015, and several other paper-based works including "Paper Serpents" and "Paper Flowers."

Paper has been widely exploited as an architectural medium of late, from Instagram accounts using paper to create surreal architectural scenes, to paper models dedicated to Soviet buildings and Polish Modernism.

"I make paper sculptures by cutting shapes and assembling them into complex forms akin to sacred architecture and three-dimensional mandalas. I don’t work from plans or preliminary drawings. I start with the smallest circle I can cut freehand and still hold in my fingers, and that becomes the centerpiece. I build out from there."
-Michael Velliquette

"The process is slow and involves improvisation and moment-moment decision-making. The individual paper pieces are combined to make larger complex components and I think a lot about the relationship between adjacent components. The hardest part is often determining the structural and ornamental transitions from one component to the next. I want the finished form to express a sense of visual equanimity and wholeness, while also revealing the sum of its parts."
-Michael Velliquette

"Depending on scale, the finished sculptures can take 300 to 500 hours to complete. I use relatively simple tools—flat edge scissors, an X-Acto knife, rulers, and glue. My process draws from the arts of paper crafting and paper engineering, combined with techniques I have discovered and invented on my own. The completed works can be shown on the wall where the viewer sees them from a frontal vantage point. Or, they can be shown flat which allows them to be seen from multiple perspectives and entered from the sides."
-Michael Velliquette 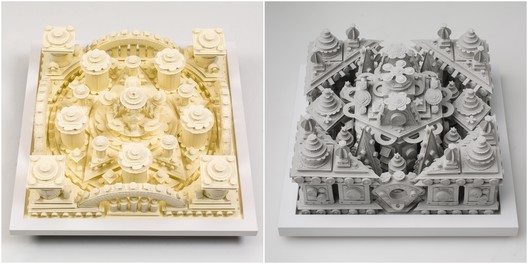