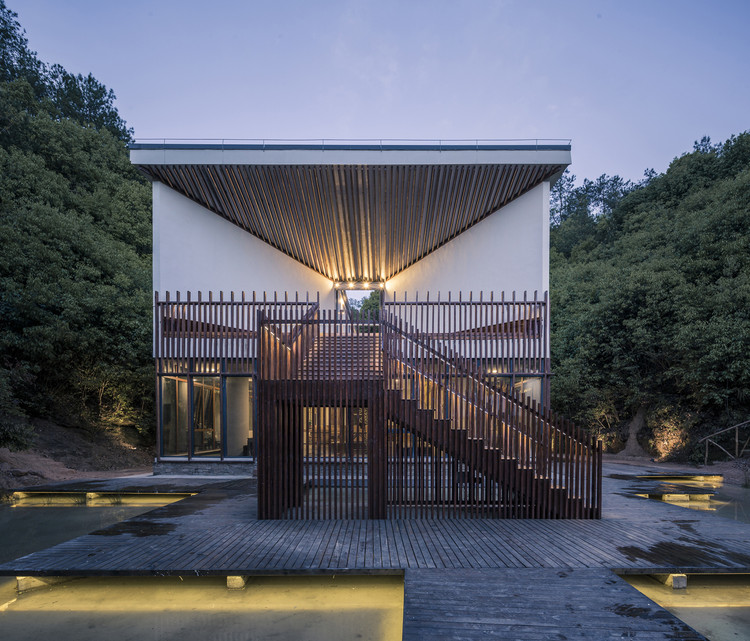 Text description provided by the architects. There is an old saying goes like this: "Half of Chinese poets are in Hunan", which shows the most distinctive feature included in Hunan's culture, that is, "poetic". Such poetic feature can be reinterpreted by the unique scenery residence of Shuangxi Academy -- laying alongside mountains and beside brooks with randomly scattered but well clustered residence. Here, all kinds of spatial designs in architecture seem to be given certain meanings: no matter it is enjoyable sightseeing or peaceful resting, bamboo leaning or fish viewing, footbath enjoying or musical instrument playing, tea tasting or incense burning, you will always find natural reflections of poetry inside. With such poetic segments melted into humanistic spirit and life, refreshed poetic symbols are created. Just like what Martin Heidegger advocated: "it is poetry that leads us to the land and makes us belong to it and live on it." In Shuangxi Academy, poetry has entered normal lives and become a place for Zen and aloofness.

The pursuit of poetry gives architectural design a sense of picture even at the beginning. On the one hand, the basic line for designing is to find a way of embedding buildings into their surroundings without damaging the scenario but enhancing it instead. It is actually more of a natural arrangement than artificial design -- pronged brooks of 11m to 14m width twist toward different direction, engraving buildings into the valley and presenting to us the facade of valley entrance only. As a result, seven single buildings of Shuangxi Academy, except for the reception hall (or restaurant) and tea room, are all hidden in four open valleys, each with its unique view. Such structure is just like cavalier perspective used in traditional Chinese painting - independent components which together form an integrated picture.

On the other hand, in the architectural style, modern material and structural technology are applied, trying to recreate traditional local building images. All these architectural design images like interior courtyard, wood frame, white wall and tiled slope, as well as elements like brick, wood and tile, are originated from traditional local buildings or partly and abstractly extracted from architectural symbols of southern China. As for construction, in addition to traditional concrete frame, materials of bamboo steel, aluminum plate metal roof and GRC (glbumm concrete) materials are also used, which raises new requirements to construction technology. As for styles, seven single buildings of Shuangxi Academy share similar elements and different features at the same time due to the landform of mountains.

Reception Hall
Because valleys limit people's vision, so tourists can only start visiting from a specific angle. Viewing from these angles, tourists will first see trees or bamboo forest, then divert their attention to further mountain ridges, positioning the sites where they stand as the medium tier of the whole picture, and surpassing the facade's mass over its flat form

At the top of reception hall, the roof line is downward arc and facade is simplified as a vertical line. Though the typical design of tiled slope is not used here, layered rafter under the cornice can still show their links with traditional structure. Other side elevations are the direct copies of the front elevation, forming an square structure that surrounds "courtyard". Basically, such structure that resembles Chinese character "回" is inspired by the interior courtyard of residence in Pingjiang district. Turnup eaves of the reception hall correspond to above skyline and also bring better hall's light and a more transparent view.

The west part that connects reception hall is almost embedded in the mountain and mainly serves as kitchen, restaurant or small exhibition hall. A huge single-slope roof tilts along mountain line, stacking and overlapping with the roof of reception hall. To thicken building structure, its main body is constructed by bamboo steel. Each vertical pillar is designed as a king tower in order to even the roof stress. Pillars and beams simply overlap with each other, forming a bucket arch in the form. The hall roof is made by GRC plate, spreading right upon bamboo steel structure. The roof surface is covered by metallic tile instead of traditional tile, which not only lowers roof load, but also lightens body structure, expressing to us a streamlined modern beauty of southern China.

Tea Room
The tea room's east facade is on the same axis with the east facade of the reception hall, achieving coherence in major viewpoints' perspective line. Total area of the tea room is 109m2. One side of the room is embedded in the mountain, the other side stretches out upon the pond, forming a half-closing L-like yard. Room corner around turning point is 8m high, pointing to the southeast sky. This "room corner" has become a marker where three valleys converge together as well as the top point that correspond to the reception hall on the axis. The roof slopes continuously toward both sides, forming a long and narrow angled-in roof. The glass wall brings broader visual experience and sufficient natural light for the indoor space.

Academy and Teacher's Room
Academy and teacher's room are in the western valley which is hidden behind a dense bamboo forest. Walking upwards along the slope, there is a stream on one side and a dense bamboo forest on the other. At the end of the road is the entry to the academy, which is located on the left side of the white wall, forming a balanced composition with the lounge on the right side. A U-shaped yard jumps into the eyes once entering the door. The yard is divided into two levels by a platform which connects two units. The well-arranged space forms an abundant landscape experience. The architectures which seem to be formed by two independent buildings can be regarded as a whole because of the same structure and materials. The roof of the academy slopes from both sides to the middle part and distributes layer by layer from far to near, forming a lineament echoing the surrounding mountains and answering the landscape around.

Valley Guest Rooms
In the general, the 86m long and narrow form winds along the valley, leaving a complete and prominent facade on the valley mouth. The stream which flows downwards along the mountain converge around the architecture and form a peaceful and tranquil picture.

This architecture, with a total area of 1,100m2, has its form tallied with the original valley terrain completely, presenting a situation of raising broken line with the terrain. The sloping and well-arranged roofs form a lane space with features of southern countryside. The guest room roofs on both sides of the land are V-shaped, which are the same with the reception hall and the academy on general form. Lean-to, with respect to guest rooms, provides better view to see the mountains from indoor.

The first floor becomes an affiliated space built on stilts on structure. It's decorated into a multi-functional lounge, coffee and water bar and a small meeting room; besides, two third of the area is embedded in the mountain. The first floor differs with the second on traffic organization. All the guest rooms are placed on the second floor, which could be entered from the observation elevator in the main entrance independently only, making the guest rooms on the second floor quiet and independent. 18 guest rooms are distributed on both sides along the lane.

Three-folded Villa
This building is similar to the valley guest rooms in architectural form because the main facade of the architecture is set on the side of the valley mouth and its main body is hidden in the valley. The architecture is arranged along the valley on a broken line. There are three independent "boxes" on each floor, which are public activity space, among which are several half-outdoor "pavilion" spaces. These spaces are connected by a corridor. Private space such as bedrooms are arranged in line on the second floor just like a "gallery bridge". The continuous bamboo steel grating facade increases the integrity of the "gallery bridge" visually. On the actual functional partitioning, the private space such as bedrooms on the second floor, when using, are independent and separated; only when necessary, they could be connected through the aisle on the second floor. The triangular folding relationship of the roof makes the integral shape more similar to traditional roof.

Quartered Villa
Almost all the architectures in Shuangxi Academy adopt a V-shaped introvertive roof, which is derived from the profile of traditional courtyard in Pingjiang. Such a profile is reflected at quartered villas more directly. The four blocks of the introvertive roof become four independent spaces for rest. The areas defined by the block and the outer wall are galleries and public areas. Such a form similar to cluster makes the whole architecture more integrated into the site and avoids the congruous sense caused by the huge volume. Four independent functional blocks are inserted into a transparent glass box, producing a spatial experience of traveling between indoors and outdoors continuously; at the same time, six small yards are formed by walls. The partial viewing windows on the wall bring with opposite scenery created by the artificial landscape in the yard and the natural scenery outside the door.

The transparent glass boxes bring the natural light from the south side into the room, making the architectural image softer. Walking outside the room and viewing from a further visual angle, you will find that the tilted roof of the architecture and the ridge line gradually rising on both sides echoing each other, even though the sense of volume of front elevation from the facade is therefore weakened.

When an architecture is inverted in the nature, all the so-called professional design or explanation should submit to the "force" or "tendency" of the nature. The enclosure of the nature makes architectures turning from confrontation to obedience, or to integration or mutualism. For example, houses in Chinese landscape painting are partly hidden and partly visible between hills and waters. The poetry in such paintings narrows the distance between the ancients and us. The ancients can enjoy landscape paintings, instead of traveling, to experience the philosophy contained in the nature. Today, we are still trying to build some scenes between the nature and architectures, some scenes for us to communicate with the nature through architectures. Such scenes might be hidden in Shuangxi Academy. When walking in the deep valley and beside the quiet stream, we may think of the verse of Zou Ni, a litterateur of the Southern Song Dynasty: "The flower shadow turns oblique and the moon westwards, I am not in the mood to move when I'm in the brook. I say nothing in front of the mountain, as only the ancients know what I'm thinking about." 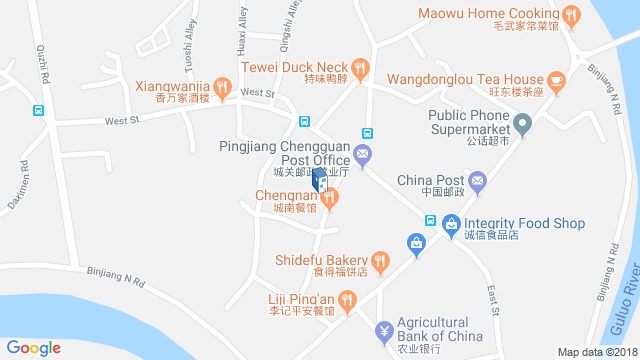 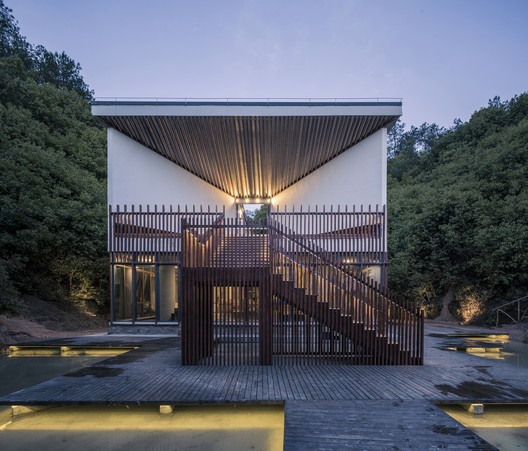