This article was originally published by Metropolis Magazine as "Can’t Be Bothered: The Chic Indifference of Post-Digital Drawing."

In architectural circles, the appellation “post-digital” has come to mean many things to many people. Some have used it as a shorthand descriptor for the trendy style of rendering that has become popular among students and, increasingly, architectural offices. Others have used it to describe a more profound shift in architectural production that is at once inoculated against the novelty of digital technique and attuned to the sheer ubiquity of “the digital” in contemporary life. 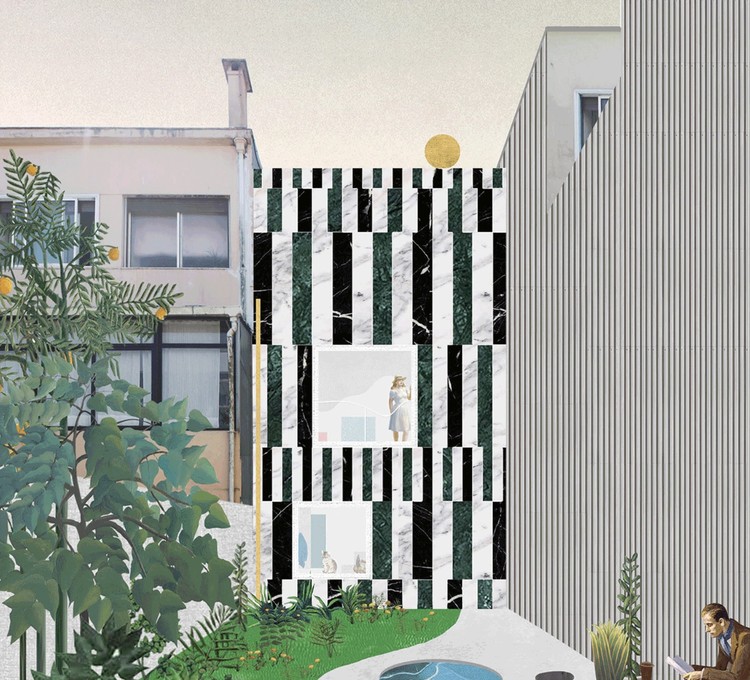 In both instances, tIn both instances, the post-digital signals awareness and savvy; a calculated world-weariness that has seen through the so-called “disruptive” promise of the digital. One need only be alive and minimally attentive in 2018 to be disabused of the stubborn positivism that has come to be associated with “the digital turn” in its broadest sense. Aspiring to an architectural sensibility of digital-skepticism is commendable, to be sure—many an artistic experiment has derived nourishment from meta-critiques of its tools of production. However, the term “post-digital” as it is used in popular architectural discourse has been shorn of its critical and subversive potential to fundamentally reconstitute disciplinary concerns and methods for a putatively post-digital age. What we have instead is the mere description of a description: just another style of architectural rendering.

This notion of “post-digital drawing” has been articulated by the architect and writer Sam Jacob, in an essay for e-flux, as “accentuat[ing] representation’s ‘representational’ quality, eschewing preset realism in order to expose how drawing and seeing are active in constructing the world.” Jacob uses “preset realism” to refer to the photorealistic renderings afforded by contemporary multi-platform workflows that combine advanced rendering software with Photoshop. Despite the wild architectural diversity depicted in these images, this “realism” can appear static and burdened with homogenizing visual tropes. More often than not, they are “all-in” images of high-contrast worlds rendered in wide angle, where street-style pedestrians abound under an HDRI sky.

This argument, pithy as it is, performs a sleight of hand by merely substituting one base form of representation with another, one set of smooth algorithmic processes for another. After all, what is “preset realism” if not a consummate form of “drawing and seeing” that actively and painstakingly constructs worlds?

The post-digital drawing, on the other hand, renders space in a manner that variously recalls the paintings of Magritte, Sheeler, Hockney, Hopper, the large-format photographs of the New Topographics, even early OMA. Varied though these references may be, the post-digital drawing extracts from them an obsession with flatness and a virtuous refusal to engage with gloss, definition, fidelity, and multi-point perspective. Here, the visual accoutrements of photorealism have been replaced with another set of tropes: square aspect ratio, relentless frontality, impossibly high focal length, often the absence of perspective, the profusion of film-grain “noise” and texture overlays, the simulation of hand-made collage or montage, suppressed or mute coloration, fragments of iconic paintings, idiosyncratic furniture, potted succulents, and sundry domestic ephemera. By valorizing the ordinary and rendering it to look like the past, the post-digital drawing is a belated manifestation of the aesthetics of millennial disaffection that first came into prominence over a decade ago.

In the mid-2000s, the British cultural critics Mark Fisher and Simon Reynolds reanimated the Derridean portmanteau “hauntology” to describe the work of an emerging group of musicians, including those associated with the label Ghost Box Records. This music was characterized by a retro-conscious impulse that mixed digital and analog processes to produce a seemingly imprecise and unsmooth electronic sound that was glitchy, scratchy, even old-timey. The aesthetics of this music reflected the cultural impasse of its time; 9/11, the invasion of Iraq, and the unprecedented expansion of finance capitalism. The murky sound betrayed a longing for a semi-imaginary Pre-Thatcherite past of benevolent state-planning and utopian Modernism. This spectral longing was represented through artfully scavenged musical samples and through the duotone collage aesthetic of the album art.

Around the same time, architecture was witness to its own “hauntological” moment. This is best encapsulated in the early proposals of DOGMA and a handful of Western European architects whose work responded to the unbridled march of laissez-faire urbanization by teetering between full-blown welfare-state nostalgia and the possibility of a utopian future. Projects such as DOGMA’s Stop City (2007) and A Simple Heart (2011) harkened to not-so-distant architectural pasts by way of massive obdurate forms represented in stark drawings, painterly collages, and ominous aerial photo-montages. These projects sought to recuperate architectural form from the giddy hallucinations of neoliberal speculation by imbuing it with the power to imagine egalitarian collectivities. While the collages constructed sublime landscapes of idealized order and harmony, the “photo-real” montages grounded the projects in the banal omnipotence of the Google Earth aerial view; a rude awakening from short-lived reverie.

In the decade since the appearance of DOGMA’s provocations, the post-digital style of architectural representation has internalized this repertoire of hauntological image-making and reduced it to a kind of filter-aesthetic that is obsessed with the look of the analog and the feel of the hand. The sexy gloss of “preset realism” has been replaced by an effete “preset retro-fetishism” that is agnostic to the functions of material, scale, program, and politics. The architectural content of post-digital imagery is overridden by the semiotics of a chic modesty, as the indifference to realism cloaks an anxious resignation to the impoverished present. The ontological promise of an architecture borne out of post-digital material ecologies and social relations is evacuated as are the radical political impulses of those early hauntological projects. What we have instead is the appearance of a pastel picturesque that renders architectural form inert to the point of meaninglessness. But perhaps that is the point.

NewsArticlesMetropolis MagazineArchitecture NewsDrawingPost-Digital
Cite: Swarnabh Ghosh. ""Post-Digital" Drawing Valorizes the Ordinary and Renders it to Look Like the Past" 07 Aug 2018. ArchDaily. Accessed . <https://www.archdaily.com/899685/post-digital-drawing-valorizes-the-ordinary-and-renders-it-to-look-like-the-past> ISSN 0719-8884
Save