A giant replica of Le Corbusier’s iconic Villa Savoye has been half-sunk off a Danish fjord as part of the country’s Floating Art 2018 festival. The installation titled “Flooding Modernity” has been designed by artist Asmund Havsteen-Mikkelsen as a “comment on the sinking of the public sphere after the disclosure of the Cambridge Analytica scandal and the manipulation of democratic elections through social media.”

As part of the summer art festival hosted by the city of Vejle and the Veijle Art Museum, the five-tonne model was towed into the fjord and sunk to sit as a half-submerged testament to a once visionary future. 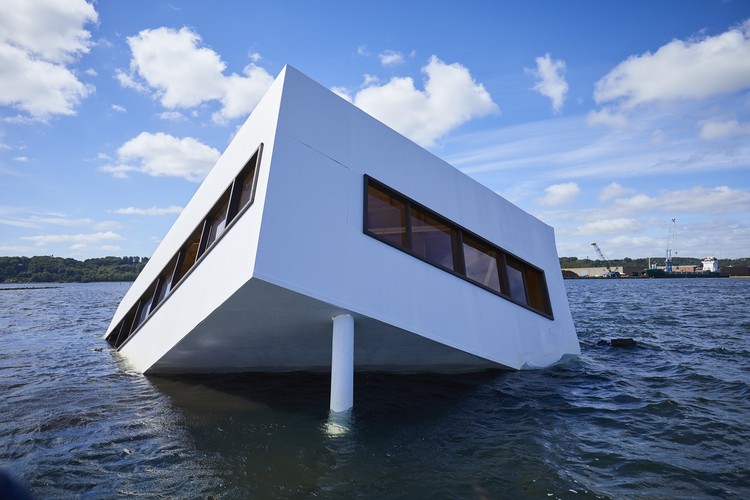 The six-meter-tall installation, representing a 1:1 mock-up of a corner of the Villa Savoye, is the latest example of Havsteen-Mikkelsen’s engagement with the influential 1931 project, having previously created 25 drawings and nine paintings of the scheme.

For me, the Villa Savoye is a symbol of Modernity and Enlightenment. It represents the faith in the critical powers of the human mind in relation to progress and in our use of criticality in the public sphere. After these scandals, I think our sense of democracy and the public sphere has been distorted through the new use of digital technologies to manipulate elections. Our sense of Modernity has been “flooded.” I sense the need to "re-state" our political institutions - because our old ones have “sunk.”
- Asmund Havsteen-Mikkelsen, quoted in ICON Magazine

The styrofoam replica is one of ten works to be exhibited at the Vejle Fjord during the Floating Art festival, which seeks to encourage “young, courageous artists and architects to reflect and investigate their contemporaries.” Other works on display include a message-in-a-bottle installation titled “Floating Thoughts from a Waiting Position” by Kristian Blomstrøm Johansson and the Red Cross, and the “Floating Blanket” by Tina Helen which carries visitors around the fjord in response to the currents. 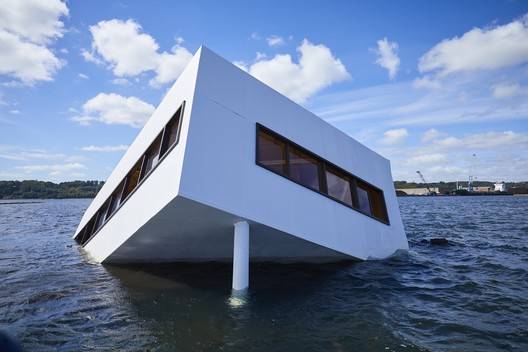