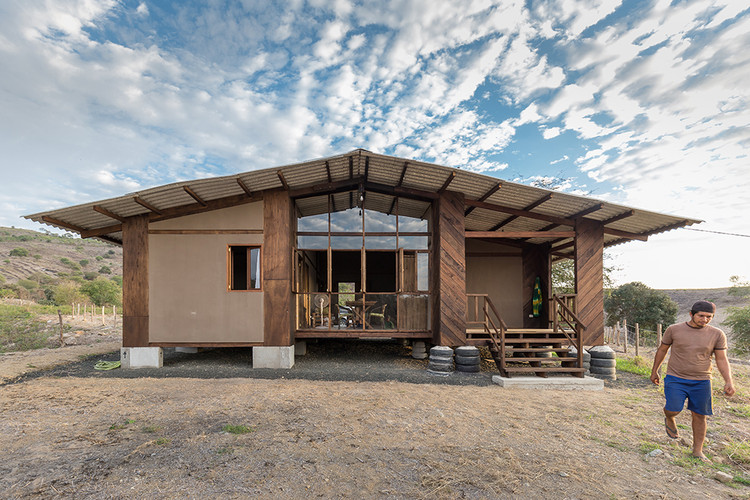 The Prototype: As a second life of the German pavilion for HIII, we developed a post-earthquake prototype for the rural Ecuadorian coast, which costs the same as the houses delivered by the state but better adapted to the user and the place where it is implanted.

It is an industrialized prototype, because its earthquake-resistant structure can be prefabricated in plywood and assembled in any rural area without the need for specialized machinery or workforce, the use of industrialized materials for the structure allows us to have greater efficiency in construction.

It is a replicable prototype, because the structural design allows the use of typical sections of local sawn wood in any part of the country and because its constructive logic was simplified thinking about the possibility that the users could self-build the extensions.

The prototype was conceived as a structural and constructive modular system that allows each project to be adapted and designed according to the conditions of each site location, so that the constructive technology of envelopes and facades vary depending on each project.

Housing implanted after the earthquake of April 2016 in  Los Horconcitos-Manabí rural area, to be used by a couple of grandparents who are visited by children and grandchildren sporadically, the weather and sunlight determined the orientation of the house that takes advantage of the air currents from the junction of the Chone River and the Pacific in the distance to ensure cross ventilation.

In the south façade, the project seeks privacy in front of the access road to the land and the neighbors while to the north the project opens with a large window that takes advantage of the lighting and the great landscape.

The initial module houses the 3 bedrooms. The first extension bathroom, cellar, kitchen and an outside balcony. The second room and dining room extension.

As the project was also the first application of the prototype of a plant, it was decided to experiment with the envelope technologies by building the initial module with walls of chopped cane, cement plaster and earth paint and the walls of the first extension with bahareque plaster of earth and earth paint that gives aesthetic uniformity to the whole house.
The house was built with a team of 2 construction masters and two agricultural assistants without experience in construction, in mingas with the family and friends of the users and in a construction workshop organized from the ENOBRA platform. All this in two months. 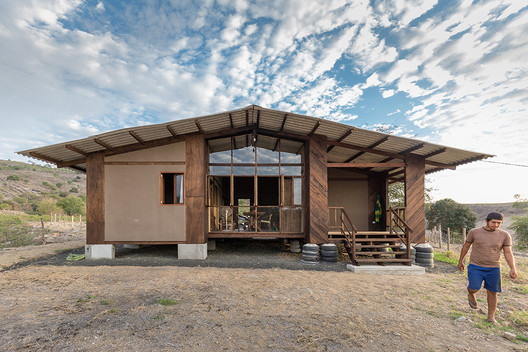