ELEMENTAL, the architecture office led by Alejandro Aravena, has proposed a solution to the physical integration of Villa 31 in the city of Buenos Aires. The building includes a raised linear park that aims to be the new headquarters for the Southern Cone of the Inter-American Development Bank Group and to facilitate access of the residents of the neighborhood to other areas of the city.

Learn more about the project, below.

Barrio 31, a place where more than 40,000 people live, lies between one of the main rail terminals and the port of Buenos Aires. The community's indicators of income, employment, education, health and safety are, unfortunately, inferior to the indicators in the rest of the city.

As ELEMENTAL points out, the building seeks to make it possible for residents to access the new opportunities for jobs, services and public transportation in the city, and to allow access of residents from other areas of the city to the neighborhood.

In the interior of the project, offices will house some 180 employees of the IDB and of BID Invest, an arm of the IDB Group for operations in the private sector. Among other projects, the IDB has supported the creation of the Educational Center, an initiative of the city government to locate the Ministry of Education in this same neighborhood, in and around where schools will also be built. 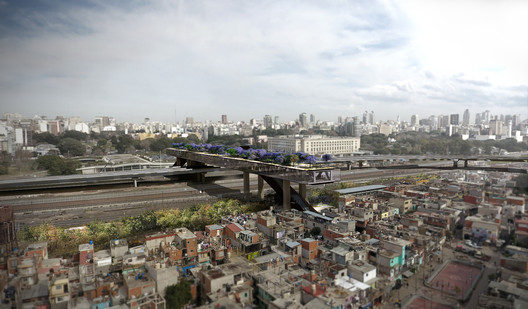