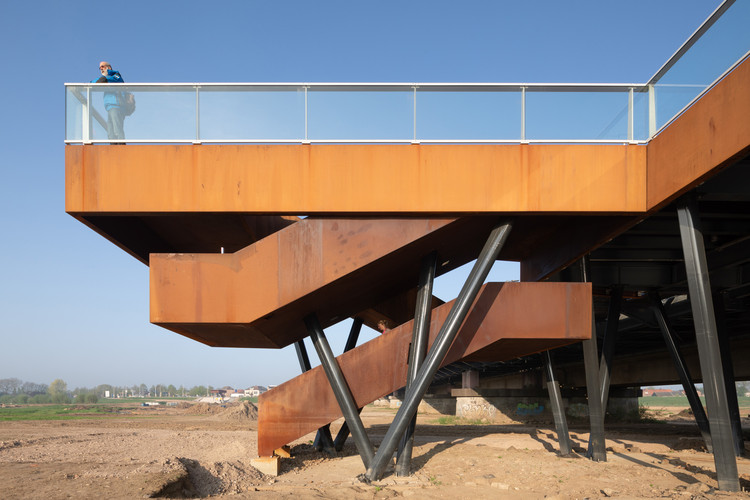 Text description provided by the architects. A new layer for a historic site
The Old IJssel-bridge in Zutphen is a site with a rich history, the current bridge already being the seventh in its place. Wood, steel, bombings and lent constructions from nearby villages literally give color to the history of this area. Architect Erik Moederscheim: “We have interpreted the design for the extension namely as a new layer adding to the history of the bridge and the city, as if it were the eighth bridge. A bridge that visibly and tangibly symbolizes a new step in the bridging of the river the IJssel, with the rediscovery of the water as the main theme.”

A strong gesture
The design is created around the ideals of comfort and perceivable quality for pedestrians and cyclists, as well as a strong recognizability from far away. With this in mind, the office designed the extension using corten steel, resulting in an iconic bold line that contrasts with the existing bridge, clearly showing the expansion as a ‘new layer’. The glass railing provides pedestrians with open views over the IJssel and contributes to the pleasant environment on and around the bridge.

The bridge as a bench and timeline
The divide between the cycling and pedestrian path carries a bench that stretches over the complete length of the bridge. Architect Erik Moederscheim: “We do not know whether we can claim we designed the longest bench in Europe or the Netherlands, but it is the longest bench in Zutphen for sure! By puncturing the steel, we enriched it with special lighting that symbolizes the constant flow of the river below. Additionally, by literally shedding light on the history of the bridge and Zutphen, the bench also serves as a life-size timeline, that guides the pedestrian through the past while crossing the bridge towards the city.”

The lighting of the bridge does not only ensure the safety of cyclists and pedestrians, but also highlights the bridge’s presence during the night so that it becomes equally as eye catching as during the day. The light changes color with the seasons.

A sculptural vantage point at low and high tide
The project ‘River in the city’, that this design is part of, is about controlling water, and especially about experiencing water. An important element of this task concerned the design of the landing points which connect the pedestrian bridge to the terrain below. Thus, the landing situated next to the river bank is designed as a destination to enjoy views of the river. This spectacular sculptural design provides two vantage points. Consequently, it does not only provide a broad view over the river, but also an intimate view of the water when the tide is high. The height of the lower vantage point is situated so that if the water reaches its highest point, your feet are still dry, but you can almost touch the water. Surrounding the landing point and alongside the river, pathways have been developed so that pedestrians can stroll along the riverside.

A new color
As part of the renovation, the existing orange-yellow bridge was painted grey-blue, the same color as the neighboring railway bridge. This way, both arcs of the two bridges form a comprehensive whole, and contrast the expansion. Additionally, the arcs of the existing bridge have been installed with new lighting in order to give stature to the entirety of the bridge 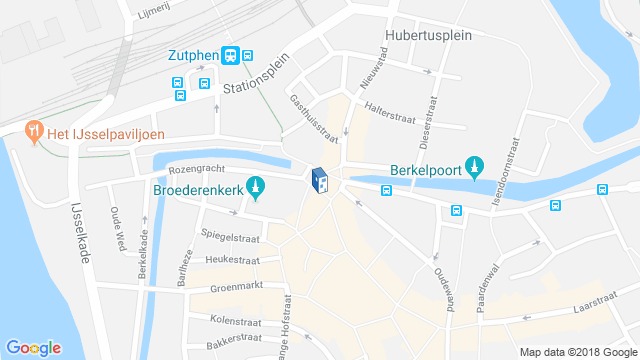 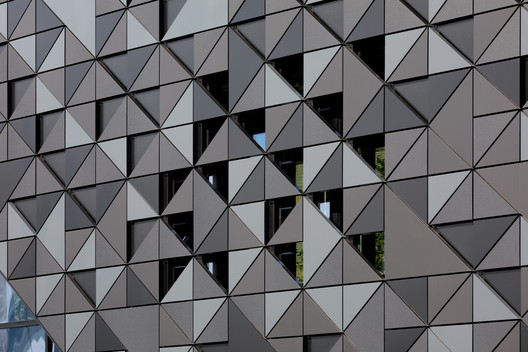 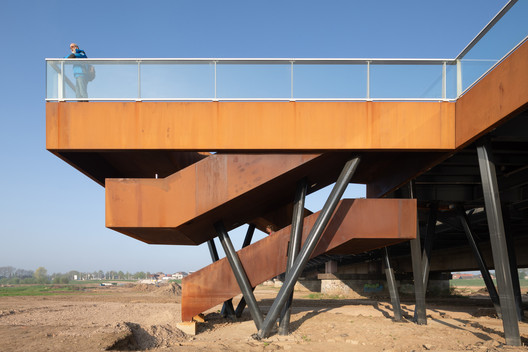