Carlo Ratti Associati, working in collaboration with Alphabet’s Sidewalk Labs, has unveiled their design for a modular paving system named “The Dynamic Street.” Intended to make streets “reconfigurable, safer, and more accessible to pedestrians, cyclists, and tomorrow’s self-driving vehicles,” the project will be on display at Sidewalk Lab’s office and experimentation space in Toronto throughout the summer of 2018.

Manifesting as a series of hexagonal modular pavers, the project explores the various patterns which can be created by reconfiguring modules, with a potential future “allowing a street to create an extra car lane during rush hour before then turning it into a pedestrian-only plaza in the evening.” 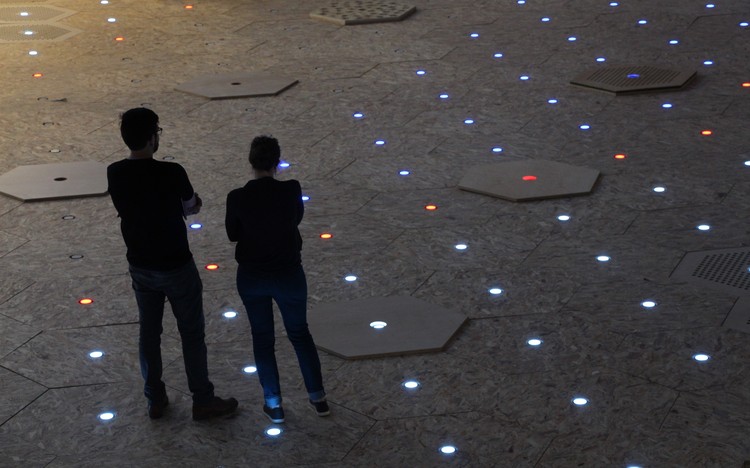 The prototype contains embedded lights in all 232 modules capable of communicating crossings, pick-up zones, and other uses. Potential also exists for each module to host a “plug and play element” including poles, bollards, or basketball hoops. Visitors to the prototype will have the opportunity to play on a digital reconfigurator, demonstrating the project’s flexibility by creating their own urban scenarios.

The Dynamic Street creates a space for urban experimentation: with this project, we aim to create a streetscape that responds to citizens’ ever-changing needs. We are excited to work with Sidewalk Labs, as we explore a new integration between the road as a physical space and digital technologies.
-Professor Carlo Ratti, Founder, Carlo Ratti Associati

For the project’s development, Carlo Ratti Associati worked in collaboration with Sidewalk Labs, and Pac Team. News of the Dynamic Street follows on from Carlo Ratti Associati’s unveiling of Scribit, a “writing robot” which draws images and text on any wall surface, turning office, living, and bathroom walls into a blank canvas for artistic expression.