“The Colour Palace” by Pricegore and Yinka Ilori has been chosen as the 2019 Dulwich Pavilion in London. A temporary structure to open at Dulwich Picture Gallery during the London Festival of Architecture in June 2019, “The Colour Palace” is a celebration of color, pattern, and light, drawing from European and African cultural traditions.

The scheme was chosen from a competitive shortlist of six emerging architecture firms, compiled from 150 entries. PUP Architects were the winners of the on-site public vote, which represented one vote at the panel judging. 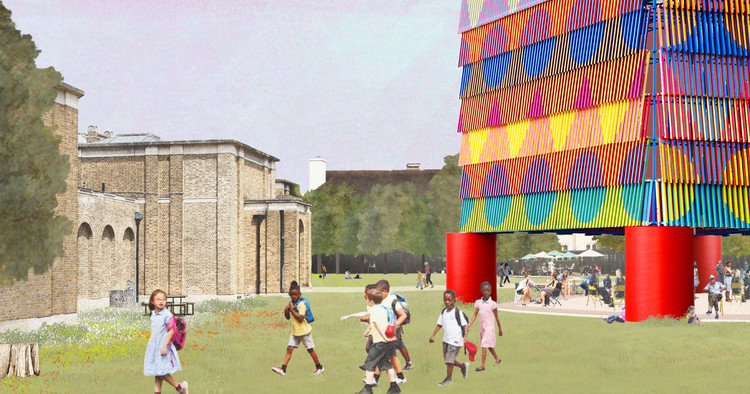 Intended as a representation of London’s multiculturalism, the bold geometric pattern of “The Colour Palace” was inspired by the Dutch wax prints from a Lagos market, mirrored in London’s “Little Lagos” district. The façade is formed by timber louvres, painted in different colors on each side to create a shifting pattern when viewed from different perspectives.

The pavilion sits in contrast with the sedate Grade II* listed Dulwich Picture Gallery designed by Sir John Soane, acting as an outdoor welcome and orientated space for visitors to the gallery. Its flexible configuration allows for performances, talks, and events, while a lightweight timber structure mounted on large precast concrete feet offers unobstructed views of the Dulwich Picture Gallery.

We are thrilled to win the competition. Despite its temporary nature, it is a fantastic opportunity for us to design a prominent and celebratory civic building that will enrich the cultural offer of the Dulwich Picture Gallery and complement Soane’s masterpiece.
-Dingle Price, Co-Founder, Pricegore

Formed by Dingle Price and Alex Gore, Pricegore is an emerging architecture firm based in close proximity to the Dulwich Picture Gallery. To create “The Colour Palace,” the firm collaborated with Yinka Ilori, a London-based artist of Nigerian heritage, whose designs feature a blend of Nigerian traditions with contemporary design.

The 2019 Dulwich Pavilion will follow on from the success of the inaugural pavilion in 2017, “After Image” by IF_DO.

News via: Dulwich Picture Gallery and London Festival of Architecture 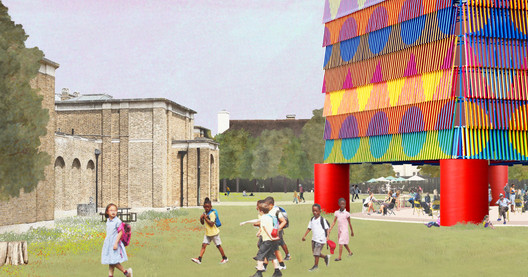