Videos circulating around social media show at least a partial collapse of Plaza Artz Pedegral, a project built in 2012 by the Mexican architecture office Sordo Madaleno Arquitectos. At the time of reporting the cause of the collapse has not yet been confirmed.

According to the online version of the Milenio newspaper, The Secretary of Civil Protection (secretario de Protección Civil) in Mexico City stated that, at the moment, there are no reports of people injured or trapped.

Video from 2016 shows part of the site collapsing around the roads adjoining the site.

An evacuation of the building was carried out minutes before its partial collapse. The head of the SSP reported that the collapse was foreseen, so the area was evacuated. In an interview for Foro TV, he assured that "there is no risk, it's just a section of construction."

For their part, Sordo Madaleno Arquitectos has released the statement issued by the Artz Pedregal Shopping Center to explain the situation. In the document, the company states that they regret the incident and explains that its technical team "immediately contacted the Secretary of Civil Protection of the Government of Mexico City to address the incident in a coordinated manner" and applied "the civil protection protocols and emergency corps of Mexico City, as well as cordoning the area, in order to avoid risks for the population." Artz Pedregal added that "it will be collaborating with the corresponding authorities to determine the causes of this event." 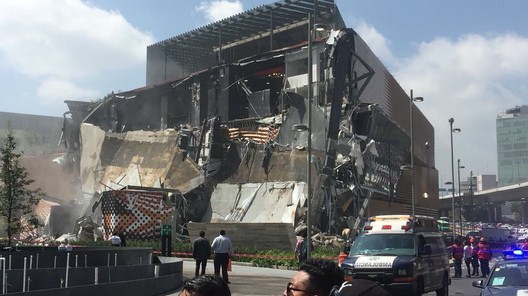