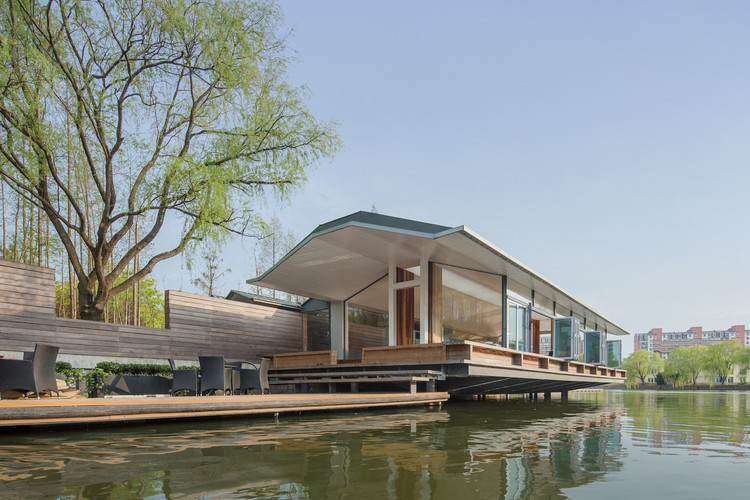 Text description provided by the architects. In order to promote and support China's rowing sport for a long term, Vanke Education Group, in collaboration with Shanghai Pudong New District, planned to build a small rowing club in Century Park to organize rowing training and activities for more youth and teenagers. Having 200 trainees each year with 20 to 30 every month, the club needs to store approximately 15-20 rowing boats and provide training & activity rooms, lockers & showers, toilets and seating areas for adolescents. The club will conduct daily training and technical instruction and also open to parents and rowing enthusiasts.

Century Park is the largest wetland park open to the public in downtown Shanghai. The Zhangjiabang River, which can be partially used for rowing training, is an urban river that crosses the park in a rough width of 35m. Rowing athletes face the opposite direction of advancing when paddling. Due to the considerations of safety and speed change, we set up the club at the bend point of the river with a cove to facilitate two-way departures and arrivals.

The site was covered with densely planted metasequoia forest, leaving only a 4-meter-wide old pier on the shore. In order to minimize the impact on the original environment, we divided usable spaces into four parts: the pier is located on the south side of the cove, the activity room is placed on the west side of the river, and the changing room is built on the old pier site. The boathouse is then the only part of the project that needs to occupy the existing forest. To avoid large-scale felling or transplanting, we split the boathouse into three thin strips scattering in the forest, roughly corresponding to the direction of the new pier.

The rowing boats have 4 kinds in size for singles, doubles, fours and eights. The length is about 8-18m and the width is only 30-60cm. The width of the “small home” we designed for the boats is limited to accommodate only one boat yet with four floors, and the length is a combination of the boat length modules. In order to reduce the impact of on-site construction in the park, the structural foundations of the boathouses consist of prefabricated point-like concrete blocks. The column composed by two bolted angle steel, is forked in the upper part like a tree to form a “Y” to support double pitched canopy. On the lower part four “branches” cantilevered from the column serve the rowing boat storage. The slender boathouses are completely open with only necessary roof shelter, making the boat carrying a weight-bearing walk in the forest.

To reduce transplanting, we measured and recorded the position of each Metasequoia in the site so that the three boathouses could be inserted into the forest from suitable angles. However, it is still difficult to position them on site. Fortunately, the sunlight casting shadows in the forest gave us generous help. Along the shadows were we then able to adjust the angles and find more spaces.

The changing room built on the original pier is a narrow bar enclosed by Bangkirai panels. The roof is made by folded steel plates supported by gable-shape beams, with skylights bringing natural light into lockers and showers. We hope that the solidity of the changing room will not only satisfy its own need for privacy, but also help us as a barrier between the forest for boathouses and the river where the activity room was located, hence to enclose the pure experiences of these two places.

The activity room in the river is a waterfront pavilion like “a boat not tied”. The bottom is barge-like rectangular steel grating on pipe piles driven into the riverbed. The cover is a 20-meter-long double-pitched roof, supported only by twin steel H-pillars at both ends - this gives freedom and access to the space: between the H-pillars is the door towards exterior platforms, between the twin beams on the pillars becomes the passage for the skylight.

The east side of the activity room is adjacent to the changing room. An eight-meter-long cabinet divides these two spaces, the front is for storage, the rear is a writing board, and the two ends contain the air-conditioners. The other three sides of the activity room are facing the riverfront; on west side three sets of foldable sliding windows provide complete openness to the outside.

Below the sliding windows is a long and wide wooden sill that can be seated, making this boundary space a place for rest, communication, and viewing. It also established a visual connection between indoor ergometer training and rowing training in the river. We not only allow the pavilion to open itself to the surroundings, but also give it a special identity through its position in the water and a slightly lower floor elevation in comparison with the riverbank. To enter the pavilion requires three steps down from the entrance, it is yet until placing yourself inside this calm space that you start to perceive the merge with the nature outside.

The pier is located at the boundary between the river and the cove on the south side of the base. The pier floats in the water and is fixed with pipe piles by embracing pulleys. It is covered with plastic wood panels and supported by bundles of buoys. Serving both sides, the pier connects to the shore through a 5.5-meter-wide ramp to the boathouse area, and to the passage between the activity room and the changing room through a small ladder. Both the ramp and the ladder are connected by hinges to comply with the fluctuation of the water level.

Pier, boathouses, changing room, and activity room are four independent venues that the club requires. We designed a set of convenient and logical circulation that can link them in an organic way. Entering from the park road, following a path into the forest, you will encounter a fork near the entrance to the club.

Turn left you will continue walking through the forest on the lane for transporting the boats. Turn right you can cross the forest and arrive at the entrance, which is a courtyard semi-enclosed by the changing room, the extension of a wooden panel wall and a large willow tree. The left path was dispersed to the boathouses in the forest, then gathered again on the shore and reached the pier through the ramp; the path on the right enters the building and become a passage between the changing room and the activity space. When passing out, it arrived pier as well through the ladder. At this point, these two paths were merged again on the pier.

In this circulation system, we paid special attention to the outdoor area. Apart from the tall metasequoia trees, there are also abundant shrubs, flowers, vegetation, and small animals such as squirrels and turtles that often move between forests and riversides. In order to reduce interfering their environment, we used wood plank paving only on the way to the building entry, but make permeable paths in the area of ​​the boathouses. Along the paths we array 600 small concrete blocks as individual dots, on which stainless steel grills were placed as trails. These transparent walkways still allow plants to grow between them, and keep rooms for the small animals.

We hope that this club will not only help the promotion and development of the rowing sport, but also be able to exert a subtle influence on the establishment of teenagers’ ecological idea through a friendly relation between architecture and natural environment. 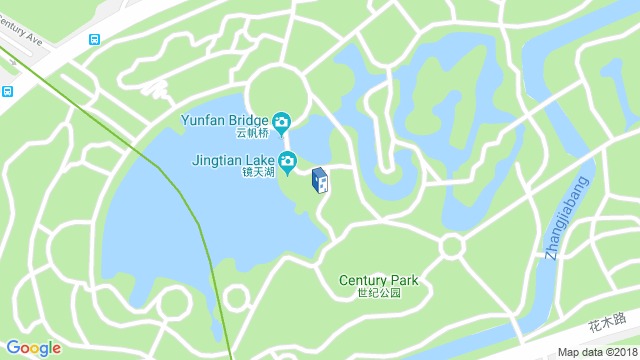 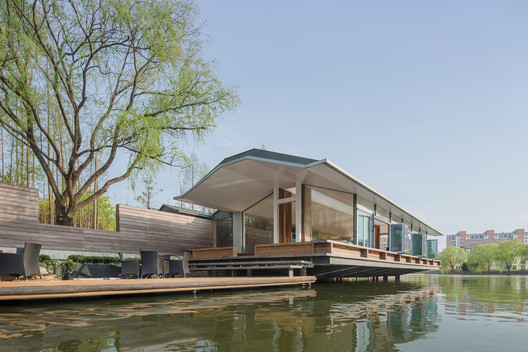