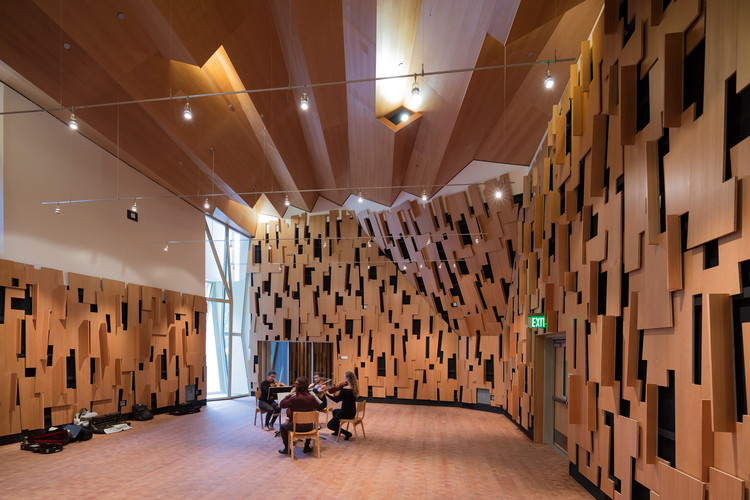 Text description provided by the architects. The new Evelyn and Mo Ostin Music Center at UCLA, designed by Kevin Daly Architects, provides a pioneering new home for UCLA’s outstanding Music Departments, where music is created, shared, and studied in digitally integrated, professional-quality facilities. Two pavilions, one a state-of-the-art recording studio and the other an ensemble performance room, are attached to the existing Herb Alpert School of Music. The ensemble rehearsal space has a café at ground level, faculty offices and teaching studios above and faces the campus landmark Inverted Fountain. The second pavilion is a commercial quality recording studio featuring a live room large enough for film scoring with a string orchestra.

These two pavilions that compose the Ostin Music Center are the first phase of a master plan for the School of Music that will refocus the music facilities outward, promoting stronger visual and social connections to the campus. It will also highlight the vitality of music performance by making it manifest to the UCLA campus community through windows into the performance spaces and outdoor concerts.

The 4,300 sf recording studio is delicately attached to the Schoenberg Music Building, which was originally designed by Welton Beckett, and the three-story, 16,000 sf ensemble and classroom building animate the south and west sides to engage the public. A focal point is the 1,500 square-foot ensemble room, which serves as a performance hall, rehearsal space, and classroom. This space can hold audiences up to 100, record up to 40 musicians, and accommodate numerous production personnel in the control room. Music technology systems are now pervasive throughout the building to form a digital nerve center that connects performance, practice, and teaching spaces (including the new multi-media space).

While both rooms are designed for a specific reverberation cycle and acoustical attenuation, they are also treated as acoustical “landscapes” that provide localized sound environments for individuals or small groups of musicians. The interior surfaces incorporate a custom-designed wooden baffle of Douglas fir and Spruce that acts as a resonator and allows varying amounts of sound to be absorbed or reflected into the space. KDA specifically designed the rooms to create a sensation of being within a musical instrument. 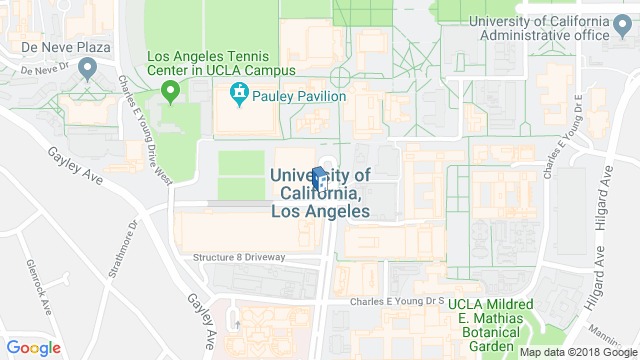 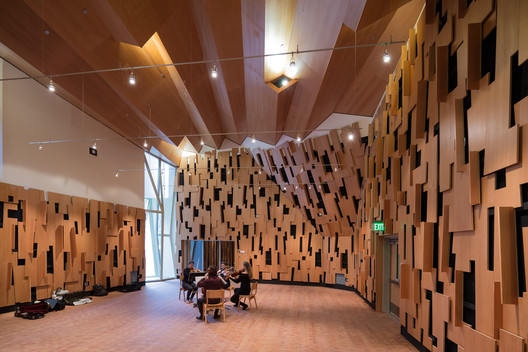