The plan is intended to kickstart future business development in the area, connecting the stadium to the surrounding area along a wide pedestrian avenue known as "The Strip." Images show that this concourse connects to a wide plaza surrounding the stadium, from which visitors will be able to look over the river towards the center of the city.

“On the concourse you will have a view over the Maas and the skyline of Rotterdam,” explained David Gianotten, partner in charge of the project, to Dutch newspaper Algemeen Dagblad. “From this point you can directly reach the entrance to the three rings of the stadium and get a glimpse of the field. The stadium is robustly modeled and exudes the architectural character of Rotterdam.”

Notable in the design of the new stadium is a dense steel roof structure, which extends over the entirety of the stands to protect fans against the unpredictable Dutch weather.

The stadium and masterplan are expected to reach completion in 2023. 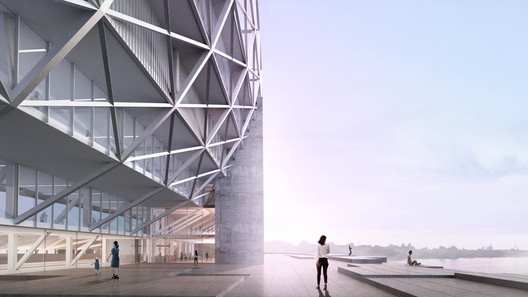