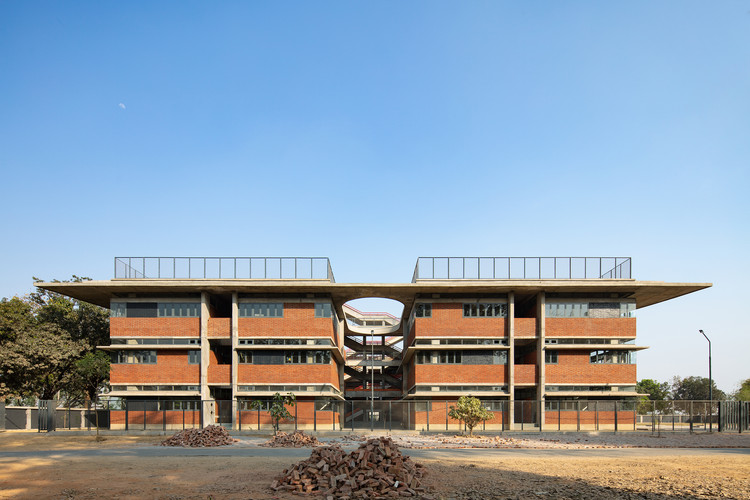 Text description provided by the architects. Taksila roots built on 1 acre land caters to the primary department of the Taksila academy and is built well within the city of Akbarpur. Like other under developed cities in India, educational Infrastructure in Akbarpur is inadequate with very little improvement .The client considers this project to be the drop in the ocean and hopes to bring about urban transformation in the city.

It is a Primary school with Classes from Nursery to 5th Standard. + activity spaces etc. The building is set on one side of the rectilinear plot, leaving a larger chunk on the south for the playfield, tyre park, service block and the vehicular parking. The building is oriented parallel to the main road, with the longer facade towards the south/ south east.

The building is designed as a set of cluster blocks connected by a large flying roof and circulation around a courtyard. It is a G +2 storey structure in exposed brick & concrete, with an organizational rule to the project. Each floor has three clusters of classrooms with activity spaces always facing the courtyard or a terrace. Outer spaces such as terraces, corridors and court are treated as educational spaces. The plinth of the project is free- flowing with open access from all sides and connects all the external spaces like stage, Splash pool etc.

The courtyard is flanked by two staircases on either side, in a mirrored position. The round cutouts on each terrace serves the purpose of a simple chajja and also adds to the play of light and shadow. The juxtaposition of these round cutouts opens up diagonal views in the project, adding to the ambience of the inner space.

The roof as a main feature of the project connects all the blocks together and gives a floating character to the school. It acts as an artificial floor used for playing activities of the kids. The roof when experienced from inside, endows a feeling of shade and protection.

The modularity and the exposed RCC structure play a vital role in the visual aesthetics of the project. Special care has been taken in articulation of structural elements with columns allowing for corner windows in each classroom, round columns around the courtyard adding to the sensitive character and the flying roof. The school has no air-conditioning. The orientation of the project, cluster formation (thermal mass), courtyard, chajjas and the flying roof result in achieving optimum temperature in the classrooms.

This project has integrated BALA elements (Building as a Learning Aid) within  the main civil construction the building. Flooring patterns, elements in the walls and corridors have puzzles, games and theorems to stimulate children’s learning environment.

This project is important to the city and to the people involved in it. Apart from the development of skills of local labor and facilitation of local craft, the quality was achieved with no special technology, thereby boosting the confidence of the construction community. It aims to be an urban instigator for betterment of the place and contribute in the future of smaller cities. 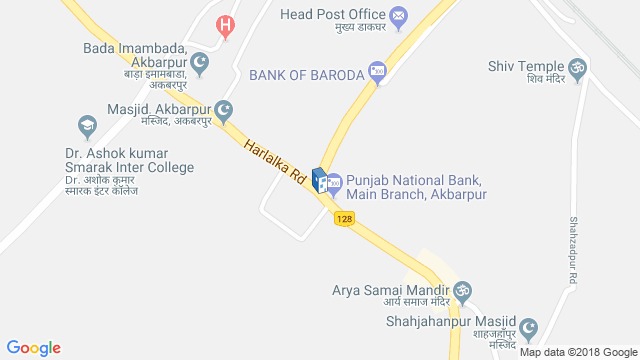