Studio Gang has released images of its first project in Canada, a mixed-use residential and retail tower at the southwest corner of Yonge and Delisle in Toronto. Intended as a “new model for sustainable urban growth,” One Delisle seeks to establish the Yonge and St. Clair district as a “vibrant, pedestrian-friendly neighborhood with thriving retail, welcoming open spaces, and world-class architecture.”

The scheme, which was designed in collaboration with WZMH Architects, is driven by a desire to integrate with the local urban context through adherence to existing grid patterns and retention of existing elements, and to provide extensive outdoor space at an important transit node in midtown Toronto. 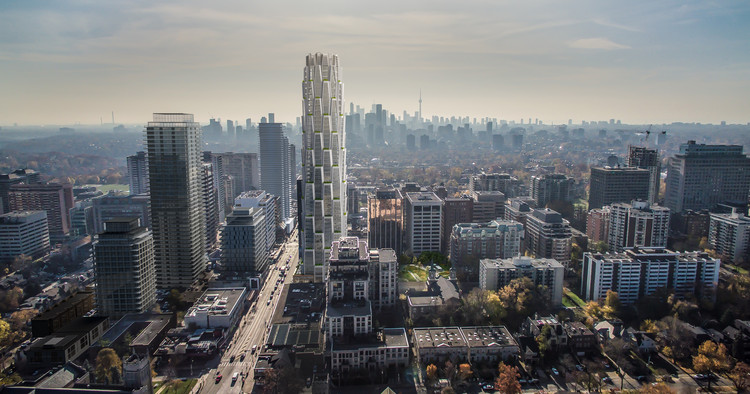 Rooted on a rectilinear base aligning to the city grid, the scheme is set back along Yonge Street and Delisle Avenue to permit wider sidewalks and increased sunlight towards ground-level retail units. In order to retain the character and urban grain of the area, the proposal includes the retention of existing building elements along 1498 Yonge Street.

Moving upwards from the base, the scheme transforms into a compact, sixteen-sided tower responding to the site’s bend along Yonge Street, while dramatically reducing shadows on surrounding buildings. The tower is comprised of a series of eight-story elements, which merge together as they spiral up the façade, with an angled geometry creating various unique residential units. In tune with Toronto’s climate, each unit will have a generous planted terrace or protected balcony.

The geometry of the façade and the self-shading it provides allows each living space to stay cool in summer, while also optimizing winter light. This gentle pitch frames indoor-outdoor connections on the balconies and terraces that spiral up the building in an organization inspired by organic growth and form.
-Jeanne Gang, Founder, Studio Gang 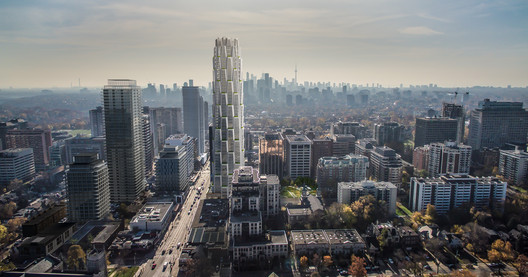