Oslo-based architecture firm Ekberg Lous Arkitekter have designed Norway’s first World Heritage Visitor Center, after having won the open international architectural competition in 2008. Following the competition, the project was halted for seven years due to a lack of funding, but has been given the green light in 2015 with revised plans and a new site. The center, which will be built on the tip of the northern shore of Vega Island, is expected to be a gathering point for both locals and foreigners. It will provide visitors with knowledge about the natural and cultural values of the Vega Archipelago and world heritage sites in general. The center is set to be open in spring 2019. 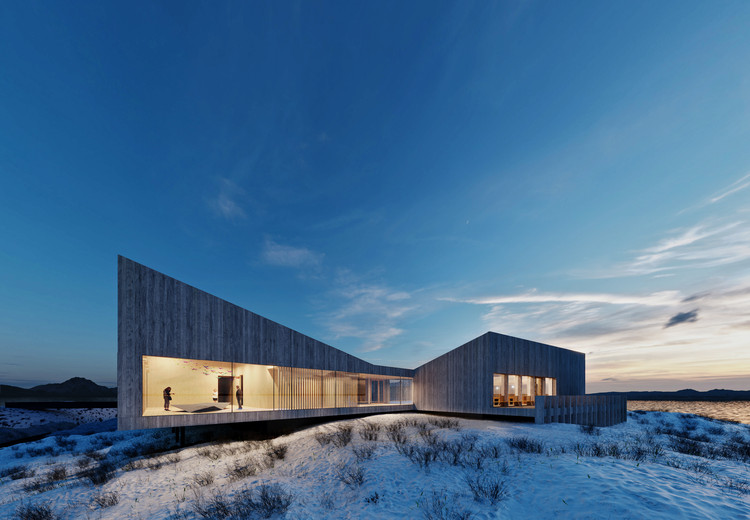 The architecture is specifically designed to enhance one’s relationship with nature. Upon reaching the center, visitors will be led by a bridge, which crosses a natural canal, leading up to the main architecture. The center consists of 3 main volumes: an exhibition wing, an office wing, and a central café. Their composition and allocation create a courtyard and transitional spaces between the buildings. The areas facing the courtyard are embedded within the landscape, allowing sunset to travel freely through the courtyard and buildings. The material used in the project are timeless and environmentally-friendly, blending harmoniously with the surrounding topography. The material selection ranges from ore-pine roofs and facades to birch-veneer and pine panel walls and ceilings.

The Vega Archipelago was listed on the UNESCO List of World Cultural and Natural Heritage in 2004, due to its powerful natural characteristics. The archipelago covers an area of 1,037 square kilometers on the Helgeland coast of Nordland, Norway. Vega includes more than 6000 islands, islets, and reefs, including the main island which possesses a rich geography of shallow coves, white beaches, and steep mountains.

The Vega Archipelago reflects the way generations of fishermen/farmers have, over the past 1,500 years, maintained a sustainable living in an inhospitable seascape near the Arctic Circle, based on the now unique practice of eider-down harvesting, and it also celebrates the contribution of women to the eider-down process.
-The Committee 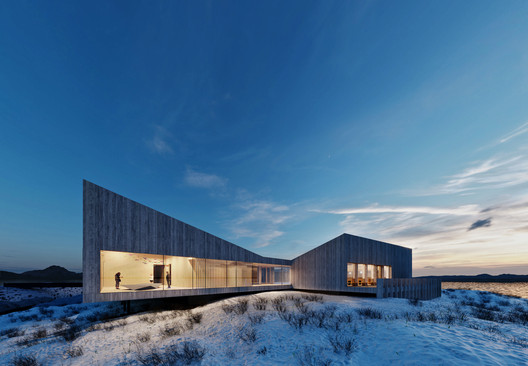