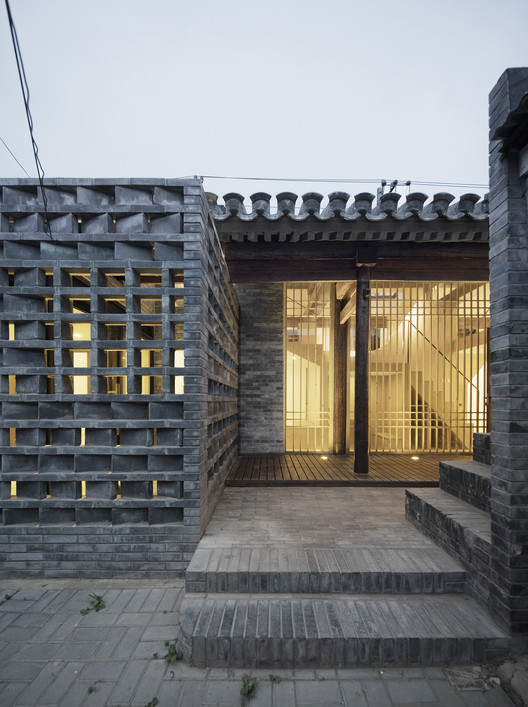 Text description provided by the architects. The V house of Cha’er Hutong is located in a courtyard house of Beijing Dashilar. The 'V' of the V house was taken from the architectural structure in two important V traffic space, and covers the concept of the "micro". It implies that the small spatial intervention in the space can provide more behavioral possibilities.

Like the general condition in Dashilar, the courtyard house with four-side halls, where the project is located, traditionally was belong to one family. It has been transformed to "Dazayuan", which means the ownership has been distributed to a total of 7 to 8 households. After four families moved out, a complete hall was formed in the north side.

As the agglomeration region where businessmen from all over the country in Beijing, the imperial Dashilar has resulted in the integration of "national culture", "grassroots culture" and "mixed culture". The architectural transformation of V house tries to expound and convey how to deal with the role of new design in the old city renewal project, where accommodates both local and migrant people.

The architect's desire of the transformation is not to erase the traces of the necessary spatial elements that are constantly superimposed by the ages. In the case of clear property rights, valuable and meaningful constructive space can be preserved, and new design techniques can be used to better integrate into the overall appearance of the area and activate new cultural memories.

Three renovation strategy of the V House was implemented.
First of all, the space of the courtyard needs to improve the utilization efficiency. This variable, functional and complex spatial volume is implanted with interior integrations of the kitchen, shower, bathroom, laundry room, the laundry room, the office, the tatami and the rest room, by using the straw board material.

The high space is formed by the east and west bay after removing the ceiling on the first floor which is open and free: it can be used for living, co-working, exhibition and small activities. On the second floor, working space is set, with semi-private space for sit-down discussion. In the triangle of the roof space under two main beams, two "V" type transport space is functioning the effective organization of multiple elevations layers.

The other big strategy is to replace the self-built part with a more solid and permanent construction. The architects took advantage of the traditional courtyard grey bricks to pile up the brick wall, forming two enclosed courtyard based on the original footprint of the self-built parts. While ensuring internal privacy, it also increases transparency for looking out. After the facade on the east side of the brick wall is fully opened, wooden grille and glass curtain wall are added to provide good lighting.

The third strategy is to readjust the courtyard open space occupied by the self-built architecture and make full use of the roof space to create a three-dimensional public space. The public activities in the indoor space can be extended to a moderate degree, including a relaxation of individual person, a private conversation between two people or a discussion of more than three people.

After the regeneration of hutong courtyard house, V house has become an incubator providing multi-functional venues to welcome the entrepreneurial teams of neighboring Yangmei Zhuitai Street as well as out comers as new residences. In the V house, people's activities are flexible: individuals can plan their own living space, and a group people can plan artist residence and multimedia creation.

New form of business and life in this courtyard could be made, through the spontaneous selection and combination of different patterns of behavior. In 2017 Beijing Design Week, an activity "ttg × slanting floor: 6 hours with strangers + melancholy newsroom", hosted many young participants who did not know each other to experience different activities, and live broadcast in the Internet.

Hutong life is compact. Every renovation of V house will continue to affect the lives of its neighbors and leave a trail of new life. Neighbors use the small platform to lay out their shoes for drying, and clotheslines are placed over the newly designed hollowed-out brick wall. Instead of an isolated architecture, Hutong life is constantly superimposed on the new renovations.

The future Dashilar, should be distinguished from the gentrification of elite community, but to present the continuation of their particular characteristics of a living and mixed traditional community. The way to get the Dashilar out of the awkward position as the dying heritage of Ming and Qing dynasty or the fast urban commodification is to synchronize with the modern facilities improvement while carrying the sprits of particular local hutong traditions. 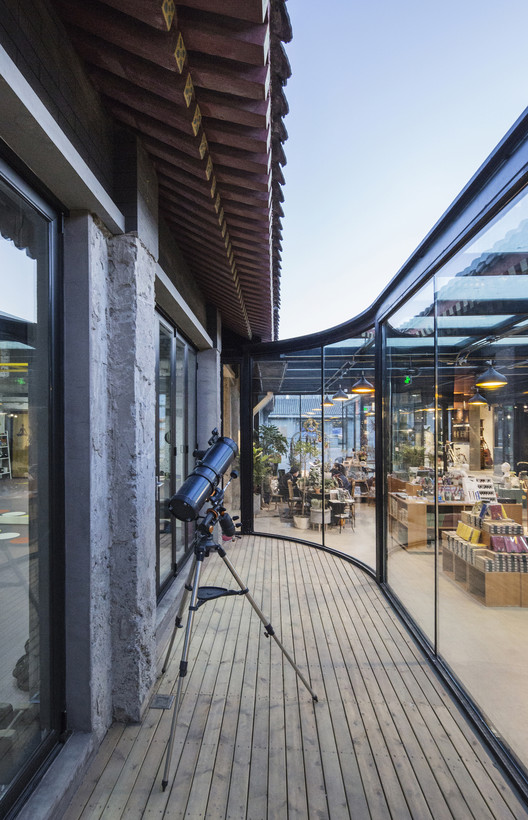