As a part of the second Art and Architecture Triennial in Bruges, Marc Fornes / THEVERYMANY’s prototype pavilion entitled nonLin/Lin has been taken out of storage and placed on public display for the first time. First commissioned and displayed in 2011 by the FRAC Centre in Orleans, France, the exhibition will explore the rise of computational form-making. The work will spend the summer installed in the nave of the Grootseminarie, a 17th century Cistercian Abbey hosting an exhibition curated by Abdelkader Damani entitled Liquid Architectures. 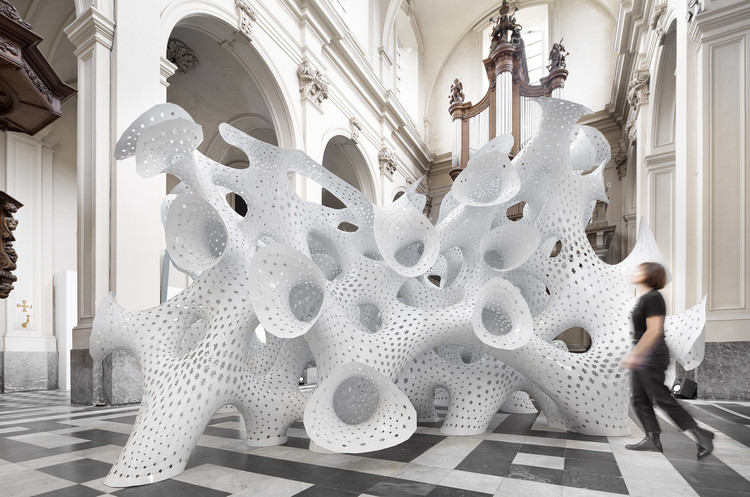 Fitting this year’s overarching Triennial theme of Liquid City, the designers explain that the “lively, fluid-like forms” of the pavilion “upend the notion of architecture as rigidly determined and immutable.” The exhibition is described as a demonstration of how digital design and manufacturing tools have created new approaches to architecture since their development in the 1990s.

Previously displayed in a sparse white-walled gallery, the piece gains a new layer of meaning from the religious architectural context of the Grootseminarie. With its bright white aluminum, smooth curves and tubular limbs, its structure creates a contrast against the classical detailing, vaulted ceiling, and patterned stone floors of the Grootseminarie.

The nonLin/Lin pavilion invites visitors inside its tangled structural network, which conjures a liquid effect with its continuous surface of 1mm thick glossy aluminum panels. These components are combined into 40 pre-assembled modules that allow the pavilion to be broken down for storage and re-installed in new places when desired. The panels are pierced by over 150,000 CNC-drilled apertures that fill the inside of the pavilion with dappled illumination. This effect will be amplified in this installation of the piece thanks to the Abbey’s sizable clerestory windows.

On display since May 5, the exhibition will be open and accessible to the public through the end of the Triennale Brugge on September 16, 2018. 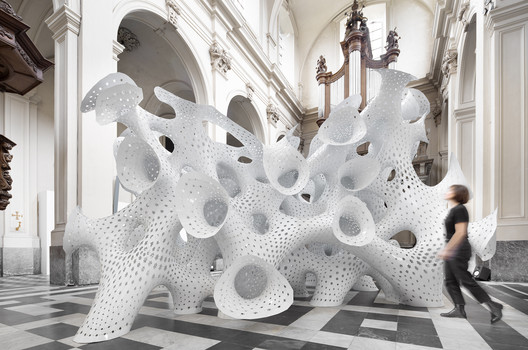