Belatchew Arkitekter has released images of their proposed mixed-use residential tower in the Nacka City district of Stockholm. Named “Discus,” the tower seeks to form a new landmark for Nacka, directly above the district’s metro station.

Comprising approximately 500 apartments and 30 residential floors, the scheme will also include commercial and public facilities to form an active street front. 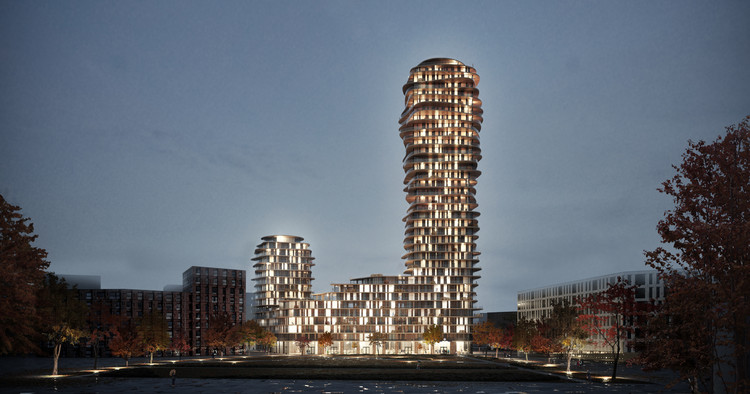 The scheme is defined by a distinctively irregular silhouette, intended to become a symbol for the rapidly-growing metropolitan area, which is set to increase its population from 100,000 to 140,000 by 2030. The Discus tower will therefore contain both residential and office functions, anchored as an attractive place to both live and work.

Nacka is a visionary municipality who dares to test new urban structures where traditional neighborhoods are combined with high rises. Public transport is crucial for the city of the future, and that we now, in Nacka's most central location, can realize our insights and ideas about an architecture for public transport with high passenger flows is very inspiring.
-Rahel Belatchew, CEO and Principal Architect, Belatchew Arkitekter.