Luzhniki Stadium was constructed in only 450 days between 1955-1956, a reflection of the Soviet Union's strong ambitions after they returned from their first Olympics with 71 medals. With a capacity of just over 81,000, the stadium has hosted the 1980 Olympics, the 1999 UEFA Cup Final, and the Champions League final, among other international events. To prepare for the 2018 World Cup, the stands have been divided into two tiers and the athletic tracks have been removed. This arena is the site of the final World Cup match.

Located on the site of a former airfield, Spartak Stadium is the first permanent home field of 22-time Soviet/Russian champions Spartak Moscow. The exterior of the stadium features a series of connected diamonds that can be changed to reflect the colors of the teams playing that day.

Construction for the Nizhny Novgorod Stadium began in 2015, and draws on themes of wind and water in its circular form. It boasts an undulating and semi-transparent facade which lights up at night. FC Olimpiyets Nizhny Novgorod is the club team who will inherit the stadium after the conclusion of the World Cup.

Mordovia Arena is set to be one of the most colorful arenas in the 2018 World Cup with its orange, red, and white exterior. Although construction began in 2010, numerous delays, mainly due to a lack of funding, meant that the stadium was not finished until late 2017. With an initial capacity of 45,000 for the World Cup, the upper tier will be removed and transformed into a walkable concourse once it becomes the home stadium of FC Mordovia Saransk of the Russian Premier League.

Located 510 miles from Moscow, the Kazan Arena was completed in the summer of 2013 to serve as the host venue for the Summer Universidade, an international multi-sport event for university athletes. This arena also hosted a portion of the competitions at the 2015 World Aquatics Championships, for which the field was replaced by two large swimming pools. If this stadium looks familiar, it's because it was spearheaded by Populous, who also designed the new Wembley and Arsenal's Emirates Stadium.

Holding just under 45,000 fans, the Samara Arena's space-like design is influenced by the region's renowned aerospace sector. Once the World Cup is over, it will be renamed the "Cosmos Arena" and become the new home field of local Krylia Sovetov.

Russia's fourth-largest city, Ekaterinburg is on the geographical border of Europe and Asia, at the foot of the Ural Mountains. Nominated as a World Cup host city, Ekaterinburg was faced with the dilemma of having to produce a venue that houses a minimum of 35,000 fans, as per FIFA rules. To meet this requirement, temporary additional seating was designed to stretch beyond the outside of the stadium, behind both goals.

Known typically as the Krestovsky Stadium or Zenit Arena, this venue will be dubbed the Saint Petersburg Stadium when it hosts the World Cup matches. Construction began in 2007, but due to a number of delays including a total redesign to comply with FIFA requirements and investors pulling from the project, the stadium was completed in 2017, just in time for the Confederations Cup. Equipped with a sliding field and retractable roof, the stadium is one of the most technologically advanced in the world. After the World Cup, the stadium will be home to Zenit St. Petersburg, and will also host several matches in Euro 2020.

Loosely based on Herzog and de Meuron's Allianz Arena, the newly built Kaliningrad Stadium has overcome a number of obstacles in order to be completed in time for the World Cup. It was initially designed to hold 45,000 seats and feature a retractable roof, but the modest, roofless, 35,000 seat venue will now host four first-group matches in the 2018 World Cup.

Another stadium built just for the World Cup, this arena features a lattice exterior and a cabled roof, making it one of the most architecturally distinct venues. After the World Cup, Volgograd Arena will be reduced to a 35,000 seat capacity and become the new home of Rotor Volgograd.

The Rostov Arena is situated on the southern bank of the River Don, and is planned to be the first development of a new city center that will be constructed over the coming years. Groundbreaking for this World Cup stadium began in 2013, during which in-tact shells from World War II were found on the site. After the World Cup, FC Rostov, the 2014 Russian Cup winners, will call this arena their new home field.

Located on the Black Sea, Sochi is the longest city in Europe, with an urban area stretching around 140 kilometers from end to end. The stadium was built as the main venue for the 2014 Winter Olympics, which explains why the stadium's form resembles snowy, sloping mountain peaks. The open ends of the stadium, which once allowed for views of the Krasnaya Polyana mountains and the Black sea, have been filled with temporary seating to accommodate the World Cup crowds. 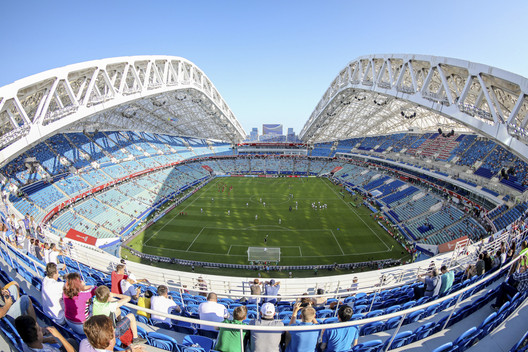