The curators of the 2018 Venice Biennale Yvonne Farrell and Shelley McNamara of Grafton Architects have announced the winning contributions to the 16th International Architecture Exhibition. Selected with the help of jury members Frank Barkow, Sofia Von Ellrichshausen, Kate Goodwin, Patricia Patkau, and Pier Paolo Tamburelli, the winners of the Golden Lion for Best National Participation went to Switzerland. Meanwhile, in the Freespace exhibition curated by Farrell and McNamara at Venice's Arsenale, Eduardo Souto de Moura will take home the Golden Lion for Best Participant in the International Exhibition.

The Golden Lion for the national pavilions was awarded to Switzerland, whose pavilion was praised for presenting "a compelling exhibition which was enjoyable while tackling the critical issues of scale in domestic space."

An honorable mention was given to Great Britain for "Island," which the jury noted was "the courageous proposal which uses emptyness as a platform for events and as a proposal for Freespace."

Best Participant in the International Exhibition

The Golden Lion at the Freespace Exhibition was awarded to Eduardo Souto de Moura, lauded "for the precision of the pairing of two aerial photographs, which reveals the essential relationship between architecture, time and place."

The Silver Lion for a promising young participant was awarded to Jan De Vylder, Inge Vinck, and Jo Taillieu "for a project that possesses a confidence thanks to which slowness and waiting allow architecture to be open to future activation."

Another Special Mention went to Andra Matin, recognized "for a sensitive installation that provides a framework to reflect on the material and form of traditional vernacular structures."

As was announced in April, Kenneth Frampton received the Golden Lion for Lifetime Achievement. His work as an architectural historian was praised for its "extraordinary insight and intelligence combined with a unique sense of integrity." 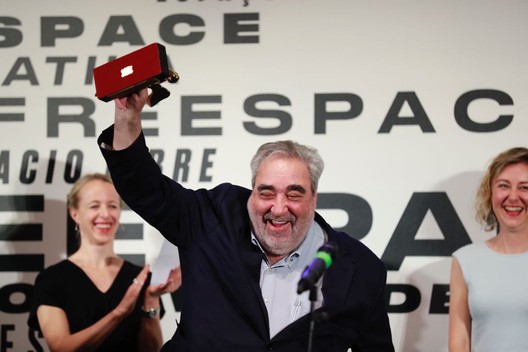