The story of Berlin’s Tempelhof Airport never quite ends.

Located just south of the city’s hip Kreuzberg neighborhood and only fifteen minutes by bike from the city center, the disused former Nazi complex—with its terminal, hangars, and massive airfield—occupies nearly 1,000 acres of prime real estate in the ever-growing German capital. In any other metropolis, this land would have been snatched up by a developer years ago, but in Berlin, creative reuse has prevailed over conventional narratives of redevelopment. 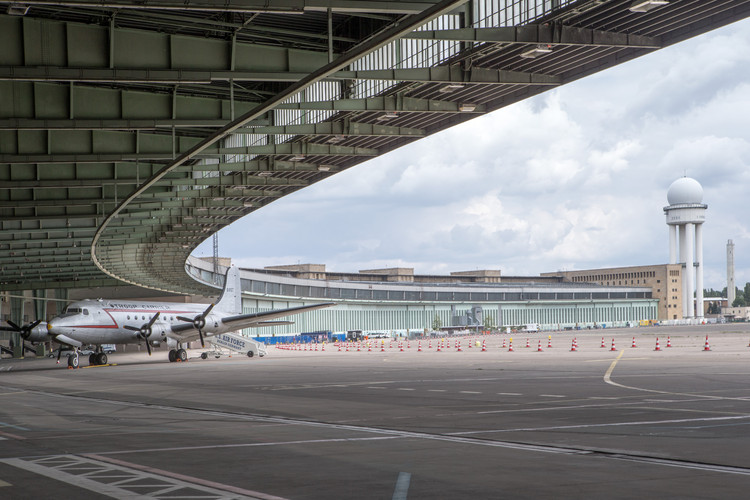 Envisioned by Adolf Hitler in the thirties as part of his plan to redevelop Berlin into Germania—a regimented, neo-classical world-capital—the airport was designed by Earnst Sagebiel and completed in 1941 under the direction of head Nazi architect Albert Speer. With a sweeping semi-circular form meant to evoke an eagle in flight, the building is in many ways typical of heavy-handed fascist German architecture. Thin rectangular windows elegantly cascade along the walls of the terminal hall, a gesture that recalls the elongated light beams used by Speer in his Cathedral of Light at Nazi Party rallies in Nuremberg. Crowds exceeding one million likewise gathered at Tempelhof to hear Hitler speak.

But Tempelhof’s Nazi origins were quickly reimagined when World War II ended. Just four years after the airport’s completion by Sagebiel and Speer, the airport was taken over by American troops who, in 1949, brought food and supplies to the besieged West Berlin, landing at Tempelhof during the Berlin Airlift. This era of the airport’s history is most fondly remembered by area residents who gathered just outside of Tempelhof as children to catch handkerchief packages of chocolate and raisins dropped from incoming American aircraft.

By the sixties, the airport had reached its commercial heyday. Departing from a similarly ostentatious structure like Eero Saarinen’s TWA Terminal at the John F. Kennedy Airport in New York, travelers would be transported to a different era of architectural history when they landed at Tempelhof. Captivated by the scale and precision of the space, Norman Foster called it “the mother of all airports.”

Tempelhof ceased its airport operations and closed to the public in 2008. For some, the site’s desolation was an appropriate way to mark the failure of Hitler’s envisioned, but never-fully-executed, Germania. But to others, finding a creative way to reuse the space felt much more appropriate than leaving the airport and its airfield closed-off in the heart of the city. In 2009, the city government began to redevelop the airfield as a massive public park, now beloved by Berliners who escape from dense living quarters to run, rollerblade, and barbeque in the converted space.

For many citizens, though, the expanse of land continued to engender fear of inequitable redevelopment—a private investor could scoop it up at any second to build luxury apartments (and many tried to). Even plans from the city to build much-needed affordable housing were met with suspicion; as John Riceburg wrote in Exberliner magazine, “this government hasn't built a single social apartment for 10 years—are they going to start right when park-side real estate opens up?”

For now, the airfield continues to be used as a park, as decided by citizens in a 2014 referendum—a remarkable accomplishment in an age when architecture for the elite has consistently trumped the preservation of urban character. The airport itself has also, in its own way, been reclaimed. Through the city’s Tempelhof Projekt, 1,200 refugees mostly from Syria, Iraq, and Afghanistan were housed in two of the airport’s former hangars beginning in 2015. Sleeping on bunk beds partitioned into rooms by white dividers, refugees make their temporary home in the airport that served as the background to so much of Berlin’s history, now perhaps ringing in a new chapter.

Roughly 400 refugees remain in Tempelhof today, and public access to the park has continued. Living conditions in Tempelhof should not be romanticized; the airport was never intended to be inhabited, and the sounds and smells alone of hundreds of people living in such close quarters are frustrating and upsetting to occupants of the camp. In times of crisis, however—from the Berlin Airlift to the 2015 Refugee Crisis—the expansive space built with fascist intent has been reclaimed for humanitarian purposes. As adaptive reuse has morphed into a trendy strain of architecture (think churches and schools converted into high-end apartments) buildings like Tempelhof airport remind us of a different kind of adaptive reuse; one that is organic, and at times, even redemptive. 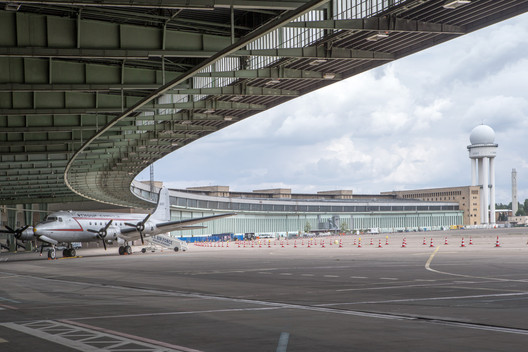