Save
Chilean Pavilion at 2018 Venice Biennale to Recreate Physical Model of National Stadium to Illustrate the Politics of Housing
Presented by:

As part of our 2018 Venice Architecture Biennale coverage we present the proposal for the Chilean Pavilion. Below, the participants describe their contribution in their own words.

At the centre of Sala dell’Isoloto stands a large-scale model of a building made of rammed earth. On closer examination, the sixty pieces that comprise the building’s oval shape appear less to be made of earth as carved in it. Layers of soil with slight variations in colour and texture recall that it is land what is at stake at the Chilean Pavilion. The layering of the pavilion’s pieces is the footprint of an artisanal process of production by which a fragile, discrete material—soil, bare earth—is transformed into a stable, monolithic object. Simultaneously heavy and fragile, these objects are in turn symbolic fragments of another transmutation: one by which slum dwellers were transformed into property owners in an event at Chile’s National Stadium, and one by which a city that grew unplanned becomes visible and fixed in a plan, that of a building able to narrate its own history. 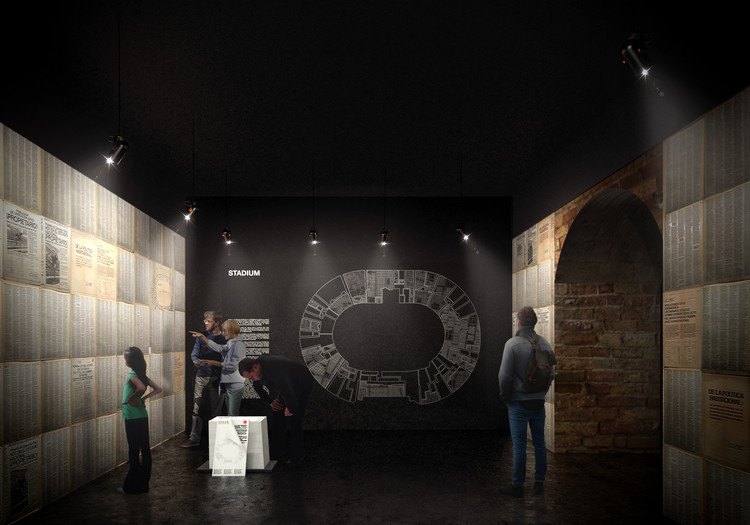 The critical reconstruction of the stadium’s floorplan as a building that renders an image of the city is at the core of the curatorial proposal. Each piece of the stadium is a fragment of the city materialized in layers of rammed earth, its top imprinted with the urban fabric of the neighbourhood it belongs to. The pavilion’s narrative is articulated around it in other four moments: ‘the event room’, ‘’the islands’, the horizon’, and ‘the city’.

The first one occupies the entire vestibule of the pavilion, and is devoted to the archival research and findings surrounding the event. On the back wall of the room opposing the entrance, the STADIUM plan, with the city inscribed in it, is exhibited as the origin of the exhibition and as a prelude to its materialization. On the left audio-visual material narrates the story and context of the event through three means: the press and propaganda, the TV coverage and speeches, and the booklet. Once in the main room the 7x5 metres STADIUM emerges in the middle. At its right hand, the south wall exhibits a second moment—‘the islands’, amplifying through interviews with people who were present at the stadium that day, the stories of three out of sixty pieces of the stadium: La Pincoya, Villa Francia and La Bandera. ‘The horizon’ occupies the north wall and is dedicated to the Stadium’s manifold stadiums in a silent film based on archival records. It gives the building its own context back, as witnesses to the city’s history, by revisiting other important events and figures at the Stadium.

The background wall of the STADIUM (a city in a building) holds a representation of Santiago with the precise location of the stadium’s pieces in it (a building in a city). The east wall offers a mirrored version of the central piece, its narrative counterpart. The structure accounts for the distance between the stadium (in the city centre) and the shantytowns (in the city outskirts), the building as part and witness of Santiago’s uneven development.