Text description provided by the architects. Marina de Empresas is located at the port of Valencia, Marina Real Juan Carlos I. More precisely, in the old bases built for the participating teams of the America’s Cup in 2003.

The project is an urban regeneration exercise where 3 of the old bases were transformed. To that end, we introduced the "soul" of the buildings: a circulation piece at the south, with sea views, which works as a great balcony to the Mediterranean and connects two of the three volumes.

Due to its proximity to the sea, the main design factor was the use of durable materials resistant to environmental aggressiveness:  FRP (Fiber Reinforced Plastic). It is an innovative architectural material but has traditionally been used for the construction of buoys and boats. We gave it a new use to cover the building.

Regarding the program, we can divide it into two parts: The one from the entrepreneurs’ school EDEM and the one from the business accelerator formed by LANZADERA AND ANGELS. The EDEM volume has only one of the old bases as structure. It required areas for collective use, such as the dining room, the study-library area or the auditorium, located on the ground floor. In the upper floors, F1 and F2, the classrooms are structured around patios allowing them to enjoy the best natural lighting. Privacy and light control during lessons are regulated by vertical slats.

LANZADERA Y ANGELS use two bases to generate the current volume. The access takes place through the union between both structures, as well as the vertical communication of the building. On the ground floor, one can find the auditorium, the dining room, the workshops and a big working area attached to them. In the other two upper floors, we find teamwork areas, illuminated through skylights, and offices for private meetings.

Both volumes, the school and the accelerator, are related by the preexisting interstice between the two bases of the America's Cup. It has been given an urban character designed as a space to have a rest. The respective dining rooms are related to this same space creating a common relationship area for different users.

Regarding the urban planning, the previous position of the bases did not allow citizens to enjoy this privileged spot. Marina de Empresas invites people to reach the seaside and enjoy it. In front of the building, we designed prefabricated concrete pieces, in modules of 1 and 2 meters, generating a set of displaced volumes that function as benches and large planters which serve as a filter between the building and the city. The sea front is returned to its people. 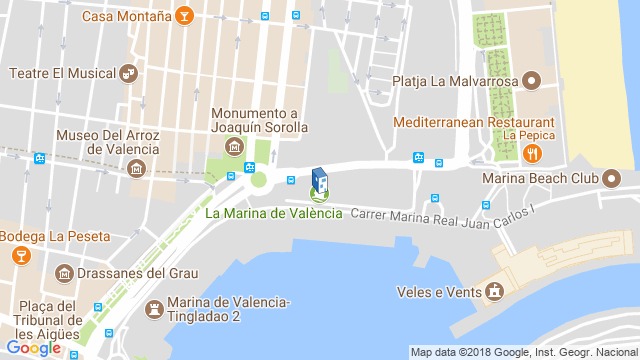 Location to be used only as a reference. It could indicate city/country but not exact address.
Share
Or
Copy
About this office
ERRE arquitectura
Office
•••