Kjellander Sjöberg Architects have won the competition for Nacka Port, a new sustainable and dynamic urban block. The award-winning architecture firm, which is one of the leading architectural offices in Scandinavia will build the project in an area between Nacka and Stockholm, Sweden.

Out of the three architecture offices who were invited to compete, the latter being held in discourse with the Nacka Municipality and Architects Sweden, Kjellander Sjöberg’s proposal contributes to a “vibrant urban context with an inviting and varied program." 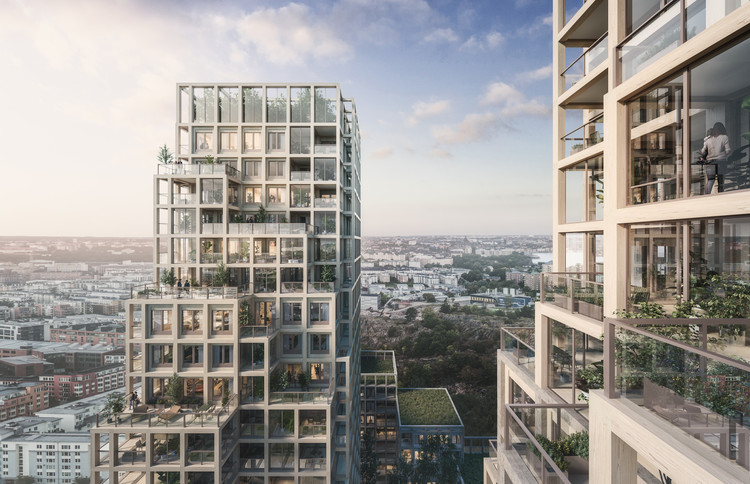 Nacka Port is an urban area situated between Sickla köpkvarter, a commercial center, and the district of Hammarby Sjöstad, an area with old industrial buildings and an archipelago environment. The competition program highlighted the importance of the project’s context and called for a solution to how experiences can be created and valued. The proposed building has the ability to reinforce the identity, routes, and nodes of the region as well as expand the connections within the area’s setting.

Nacka Port is a great opportunity to work out a project with three dimensional sculptural qualities as well as a humanistic and dynamic program. The block has great potential to become a sustainable and vibrant environment, increasing the concentration of the area.
- Stefan Sjöberg, architect.

The project is a three-dimensional urban block with a series of flexible and open squares, diagonally placed on site. In addition to their varying characteristics, these squares are placed facing the nearby traffic, attracting residents and initiatives by markets and open-air cafes. The area surrounding the block provides open spaces where pedestrians and cyclists can visit. In addition, a unified volume towards the southwest is divided into two towers of different heights.

The squared recessions formed by the staggered facades of the towers create private and communal terraces ideal for greenery. The structure is mainly designed to provide distinct impressions from different angles and directions, creating a “three-dimensional fluid experience”.

The project group has concluded that Kjellander Sjöberg’s proposal is the most convincing in its unification of architectural quality and functional demands. The proposal presents an outstanding and well thought-out analysis and understanding of the site and its surroundings. The project is characterized by an overall sustainability concept that, besides choosing environmentally friendly construction materials, provides residents and visitors with a sustainable urban experience of green structures, flexible surfaces, spaces for temporary activities, and places for cyclists and pedestrians.
- Excerpt from the jury statement.

The Nacka Port’s main concept is to have a “positive vision of the future” creating a suitable life for both humans and the planet. Focusing on the ecosystem services, the architecture is carbon positive, created with renewable material and a healthy micro-climate. Kjellander Sjöberg’s Nacka Port will be an urban and sustainable block which connects and creates a viable lifestyle.