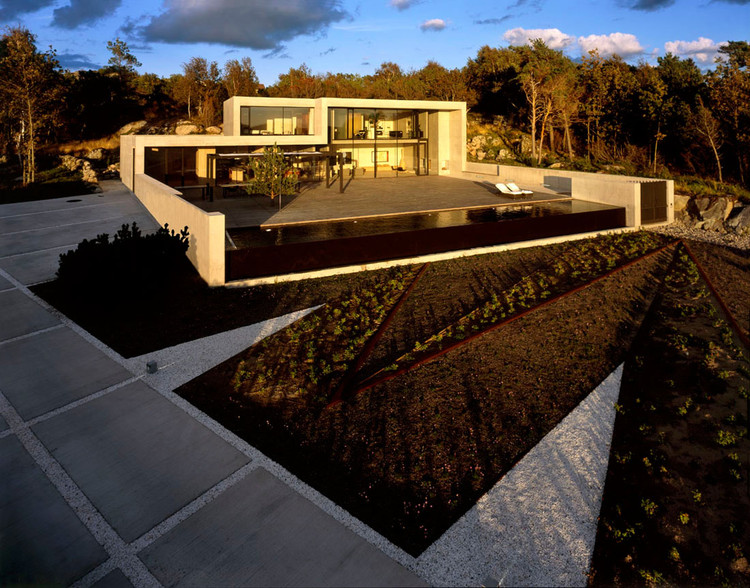 Text description provided by the architects. I've been wanting to design this house for a long time. The obvious design, with a series of rooms arranged along a line. My client wanted to be sure that it was possible to construct a good house on the site before he went ahead and bought it. This meant that time was critical one autumn day in 2003.

The first design is very close to the real thing. The house's bulk extends over the whole of the permitted building width and has been placed as far back on the site as possible. A long, narrow pool has been built at the end of the site closest to the sea. The house thrusts into the slope in sections, while the pool is lifted and framed by two concrete walls. Villa Ann has an extremely simple plan. It has three rooms and a kitchen. These consist of a living room on the ground floor and two separate bedrooms upstairs. All generously proportioned.

VillAnn is extremely oriented towards the sea in the west. All that separates the outside from the inside is a whole, thin glass membrane. (Well, comparatively thin - it consists of a 10 mm outer tempered glass pane that didn't even shake when hurricane Gudrun struck.) The house is made of concrete that has been cast on site. Thick sections made it possible to vibrate the concrete between the reinforcement bars to the smooth form plywood. The contrast is maximal - thick and thin, closed and open, man-made and natural.

Brushed and lightly white-glazed Douglas fir dominates the floors, joinery and tables inside the house. The floor boards are 30 centimetres wide and as much as 14 metres long. The pool has been cast in black concrete and the water runs over the edge on the western side. A steel frame with a fabric covering stands above a long, concrete table on the greying wooden decking, providing welcome shade.

The grounds in front of the house facing the sea have been designed by NOD. Zig-zagging steel girders define the outline of the parterre, which is suggestive of exaggerated waves of sand. There are different biotopes on each side. The parterre screens the inside of the house from the public road, which, via an easement, rather unfortunately separates the house from the sea. 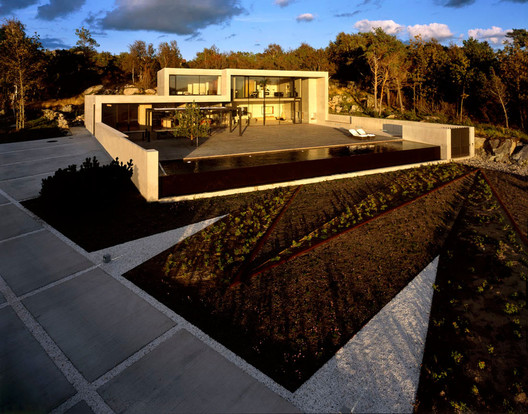