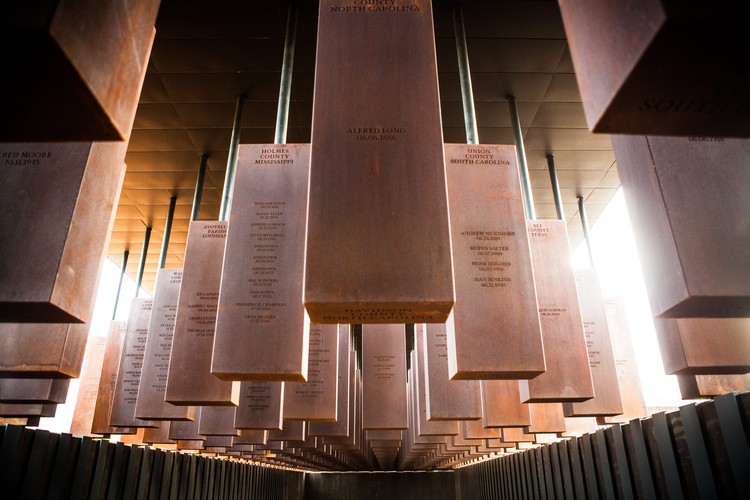 The memorial was conceived with the goal of creating a sober, meaningful place of reflection for America’s history of racial inequality. Set across a six-acre site, the memorial contains over 800 corten steel monuments: one for every county in the United States which experienced racial terror lynching. Engraved in the columns are the names of lynching victims, symbolizing thousands of people through history who suffered from brutality.

A journey through the memorial begins with a confrontation by a sculpture by West African artist Kwame Akoto-Bamfo, before leading visitors on “a journey through slavery, through lynching and racial terror, with text, narrative, and monuments to the lynching victims of America.”

The center of the site is occupied by a memorial square designed in part by MASS before the journey continues through the Civil Rights era with a sculpture dedicated to women who sustained the Montgomery Bus Boycott, created by Dana King. At journey’s end, the memorial confronts issues of contemporary police violence and judicial bias, in a final work by Hank Willis Thomas. The memorial also displays writing from Toni Morrison, words from Dr. Martin Luther King Jr, and a space dedicated to Ida B. Wells.

Also opened on April 26th in Montgomery, Alabama was the Equal Justice Initiative's “Legacy Museum: From Enslavement to Mass Incarceration,” an 11,000-square-foot museum on the site of a former warehouse where enslaved black people were imprisoned. Relying on first-person accounts of the domestic slave trade, the EJI’s extensive record of materials and exhibits, and recently created content on segregation, the museum explores racial inequality and its relationship with contemporary injustices.

Visitors to the museum are confronted by slave pen replicas, narrated by first-person accounts of the dreadful conditions. Enriching visuals and data give visitors the chance to investigate America’s history of racial injustice, as do curated sculptures by Titus Kaphar, Sanford Biggers, Elizabeth Catlett, and John Biggers. Creative partners also include Local Projects, HBO, and Google. 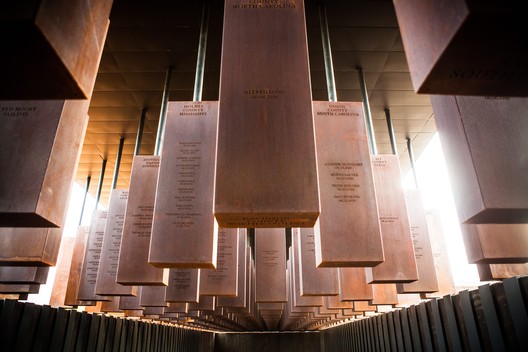