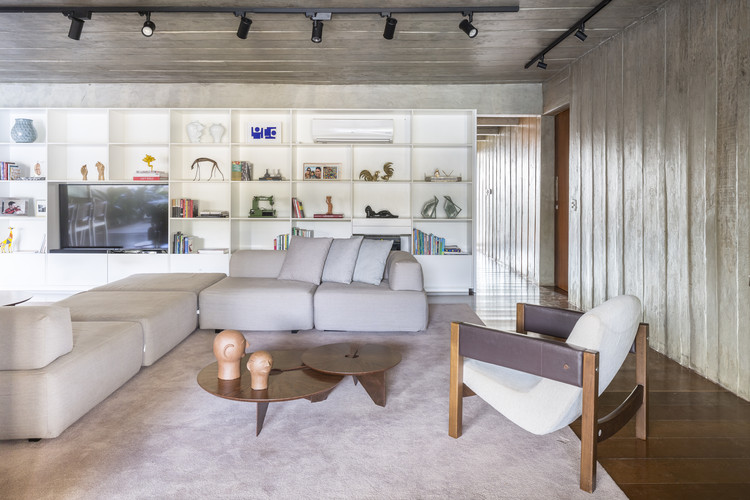 Text description provided by the architects. Milton Ramos design for the project 53 dates back to December 27th, 1972, however the house was finished only in 1974. The Architect Milton Ramos was an important collaborator to Oscar Niemeyer on the design and detailing of some of his most iconic buildings in Brasília, such as the Itamaraty palace and the National Theater.

For 40 years, this residence belonged to the same family, although it has not avoided interventions that has altered the author’s initial concept. The reflective pool was covered by soil, a fence was placed in the external vestibule (preventing any direct access to the main door) and the interiors of the house – once in exposed concrete -  were covered by layers of mortar, plaster and white paint. There were other small interventions made in the windows, door openings and wall covering, however the measures mentioned before were the ones which most changed the original design.

BLOCO´s project for the house restoration and retrofit has adapted the house to the new owner’s necessities as well as it has recovered some aspects from the original concept: free flow between spaces, omnipresent exposed concrete usage and water usage. These aspects are well-known in others public designs by the architect Milton Ramos and they were wisely adapted to the residential scale in this project in Brasília.

In this intervention, the original Ipê wooden floor was recovered and the exposed concrete on the interiors of the house was exposed and restored. The reflective pool in front of the house was rebuilt (once covered by soil in previous interventions) and the existing fence was removed in order to free the main access, as it was intended in the original project. Existing bathrooms were adapted and divided for the creation of suites, the central restroom was made bigger and the kitchen gained a new access to the dining room. All these measures adapted the house according to the owner’s necessities and they recovered some aspects from the original concept.