Save
Tensegrity Structures: What They Are and What They Can Be
Share
Or
Copy

Through his extensive research, inventions and structural experiments, Buckminster Fuller created the term tensegrity to describe "self-tensioning structures composed of rigid structures and cables, with forces of traction and compression, which form an integrated whole" [1]. In other words, tensegrity is the property demonstrated by a system that employs cables (traction) and rigidity of other elements (usually steel, wood or bamboo) capable of acting under the intrinsic stresses (traction and compression) together and simultaneously, giving greater resistance and formal stability. It creates an interconnected structure that works biologically like muscles and bones, where one element strengthens the other.

For Georgia Victor, "It is used today to explain the organization of the elements that make up living beings according to the characteristics of their geometry. This spatial organization forms a continuous field of tensions and compressions in constant equilibrium, in a game of tensions with the force of gravity. " [2]

In general, the system works by joining opposing forces and, according to Fuller, is the "structural basis of nature; capable of, with a minimum of elements, forming a strong structure" [3]. American contemporary sculptor Kenneth Snelson - a former student of Buckminster Fuller's - played an essential role in the development of the structural system, working with pieces composed of rigid and flexible components.

Snelson's work that best embodies the system is the Needle Tower, a sculpture created in 1968 measuring 18 meters high, 6.18 wide and 5.42 meters long that allowed Fuller to theoretically develop the idea from tensile integrity analysis. The geodesic dome designed by the architect already hinted toward the notion of the tensile structures in 1948, despite the difficulties met in the assembly process of the prototype which stood only for a few minutes [5].

Rigid bars act on compression forces and are arranged in an isolated, non-touching manner, complimenting the steel cables that receive tensile forces. The concept was expanded, incorporating "structures that may not be self-balanced, but which contemplate the principle (...), formed by tension cables and compressed bars isolated from each other" [7] like Fuller's geodesics.

The system has been attracting the attention of researchers, as Deifeld and Pauletti say. According to the authors, the largest architectural structure to use the system is likely the roof of the Georgia Dome [8] in Atlanta, Georgia. Recent research, such as that of Kuan-Ting Lai termed "Reconfigurable Tensegrity Systems," has sought to explore the possibilities of using the principles to construct a structural system that can be reconfigured later from an understanding of the basic rules of the system, with the construction of a prototype of pneumatic cylinders and polycarbonate panels demonstrating this showing the potential.

Another example is the research developed by students of Ball State University in Muncie, Indiana under professors Gernot Riether and Andrew Wit, who are working towards formalizing parametric structures from 56 light and auto-shaded modules using elastane tissue to create a pavilion that offers protection from the sun. Structurally it was created from modular variations in measures and rotation from parametric software - Rhino and Kangaroo, essential for the conformation of the formal process.

The properties of the tensegrity structures feature considerable structural advances based on the integrated system of all their parts, in which each part is essential to the function of the larger structure. There are several researchers and architects developing prototypes and seeking a greater understanding of the potential of the system. Although practical applications in architecture and engineering are not yet so common, the system has several possible applications. 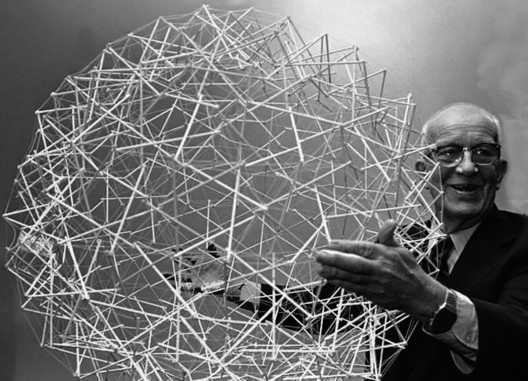