The MIT Press, in collaboration with the Andrew W. Mellon Foundation, is set to digitize landmark out-of-print architecture and urban studies books published by the MIT Press, making them freely accessible online for discovery and research. Aided by a $157,000 grant by the Andrew W. Mellon Foundation, MIT Press are enabled to digitize a collection of “image-rich and intellectually prized architecture and urban studies titles” complete with the commissioning of new forewords for the works. Following the project’s completion, MIT Press intends to distribute a minimum of 25 titles for free on several platforms, including its own ebook service.

Among the titles to be released are Francoise Choay’s “The Rule and the Model: On the Theory of Architecture and Urbanism,” which links modern theory with classical and Renaissance architecture, and John Templer’s “The Staircase,” regarded as the first theoretical and historical analysis of the elemental stair. Books on the subject of famous architects will also be released, such as Donald Leslie Johnson’s “Frank Lloyd Wright vs. America: The 1930s” and Grant Hildebrand’s “On Leon Battista Alberti: His Literary and Aesthetic Theories.”

Bringing these out-of-print texts to the scholarly community and making them accessible to a wider public reflects their importance as intellectual resources and our mission to re-imagine university-based publishing. The MIT Press has a longstanding commitment to architecture and urban studies, and we are honored to have The Andrew W. Mellon Foundation supporting this project under the Humanities Open Book Program.
-Amy Brand, Director, MIT Press

News via: The MIT Press

I f you don't have access to an architecture library (and even if you do), sifting through shelves can take hours. Buying books can be even more painful - for your wallet, at least. Instead, why not browse this list of 25 books that are all free and easily accessible online? 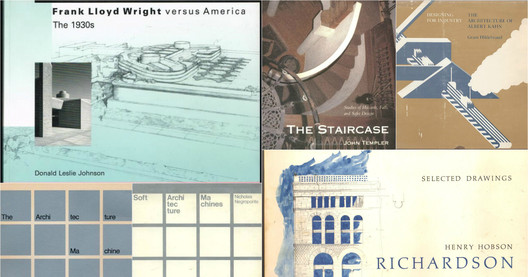