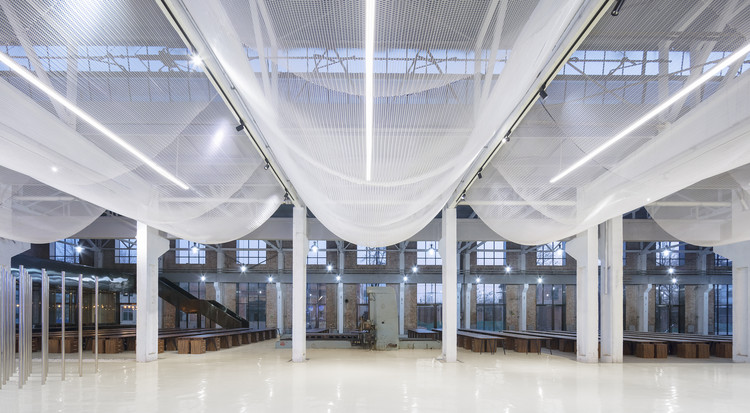 Saving Cultural Heritage
Superimpose designed an exhibition centre for Changzhi, a third tier city in Shanxi Province of China. Under the prevailing economic and urban transformation in China, Changzhi faces suburbanisation, which is effecting into a new CBD. The main design challenge for Superimpose was to either erase the current city fabric or try to preserve the province’s fewest remaining industrial heritage.

Superimpose was appointed to take part in the CBD design. The future CBD is planned on a site, which has more than 15 former bearing factories built in 1945 for the Liberation War. The 70 years old heritage embodies a significant historical and cultural value. In 2011, the client successfully acquired the land through auction. With recent economic pressure the client and authorities planned a completely new urban development, ignoring the actual added value of the heritage. Superimpose strongly believes city growth can be carried out in the form of preservation and regeneration.

In order to convince client and government to preserve instead of demolish, Superimpose referenced to successful local and international regeneration examples, such as 798 Beijing Art District and 1933 Shanghai Slaughter House. Cultural heritage as added value to the surrounding developments, owned by the same client, generated vision alignment with the client’s marketing team. Eventually Superimpose successfully convinced both authorities and client to preserve and revitalise at least 70% of heritage into a “Cultural Hub”.

As part of this ‘cultural hub’, Superimpose regenerated the first and the largest of the former factories into the ‘Changzhi City Expo’, which will host as an exhibition centre, a government-meeting centre, office spaces and an auditorium.

Aim: Revealing the unique spatial quality
Superimpose’s main design strategy for the ‘City Expo’ was to investigate the original distinctive elements of the factory and insert minimum architectural interventions to restore the spatial quality and simultaneously provide the required programmatic functionality of the exhibition.

Key features of the factory are the repetitive structural frames, the unique and wall-painted propaganda slogans, and rhythmic façade openings. The original brick façade is robust, rhythmic and designed for industrial purposes. To adapt and accommodate the current needs, a level of intervention is introduced to the facade.

The original load bearing factory façade was concealed by an office extension on the east side of the factory that had a comparatively denser grid wall structure. Superimpose proposed a veranda by removing all the interior subdivisions of the extension, revealing the original factory façade and made this into the main entrance of the Exhibition Centre. The essence of the extension is kept by framing the original windows and doors without any infill. The glass roof veranda offers a sequential arrival space, which pronounces the main entrance and promotes accessibility.

The repetitive nature of the South façade is emphasised by replacement of protruded black aluminium frames and clear double glazed windows, with operable pivot doors for outdoor events.

For the interior Superimpose proposed a wide central ‘catwalk’ which hovers above the existing concrete floor. This catwalk spans from the East entrance to the West of the factory and connects the entire exhibition program. At the same time the raised ‘catwalk’ provides a smart solution to hide all the ductworks and cables without excavating into the existing floor.

Coinciding with the central catwalk, a white ‘veil’ metal mesh is hung from the ceiling. The ‘veil’ is hung in between the repetitive beams and columns, articulating the rhythmic structure of the architecture. The application of the ‘veil’ helps softening the industrial space. It filters the daylight from the roof light and defines a human scale within the vast space. Light fixtures are placed in between and above the mesh, creating multiple light configurations for different occasions during the evening.

A mezzanine level is strategically introduced to utilised the double height space. While the ground level is for public, the mezzanine level retains privacy for open plan workspaces, library and enclosed meeting space.

Superimpose’s ‘RE-VEIL’ started with a vision to challenge urbanisation in the fastest growing country in the world. The project is a benchmark for similar cities in China, which are undergoing prompt urban planning decisions with cultural heritage.

Superimpose embraces the original architectural qualities of the factories by overlaying them with carefully considered and minimalistic modifications and interventions. Materials and labour are all locally resourced andtaken into account in the early stages of the design process.

Superimpose wants to celebrate cultural heritage and create places for the people and property that simultaneously helps clients and governments to reach their targets. One of the historic propaganda slogans in the Changzhi Expo states in big red characters: ‘大胜利’ which means, big victory. Superimpose hopes that the Changzhi Expo is a big victory, leading to plenty more successful heritage transformations to come. 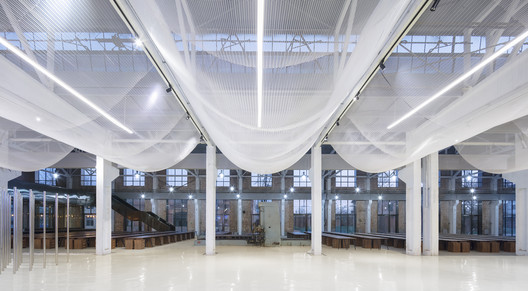