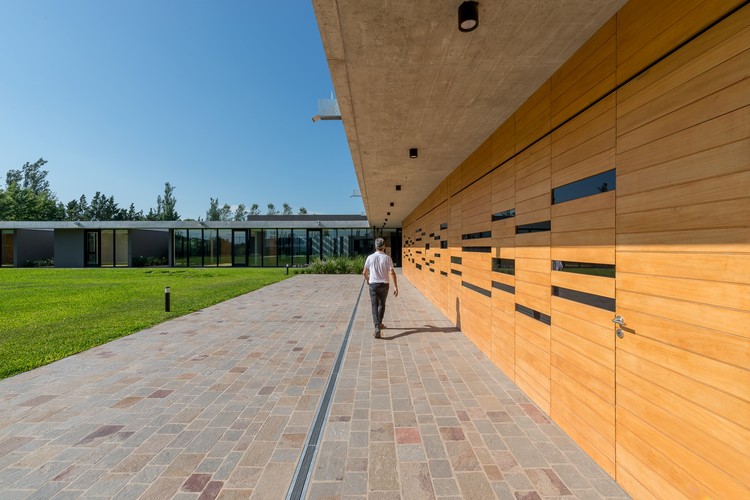 Text description provided by the architects. Projecting a house of such big scale and in just one-story has faced us to difficulties we never had experienced before in domestic architecture.

For example, how to link the different areas in such a widespread surface or how to do in order that corridors do not seem to be endless…

The first decision was to divide the floor plan in three independent, very well differentiated blocks.

One of them corresponds to the house in strict sense, placed perpendicularly to the street, west/east orientation with its principal facade opened up to north. The other two blocks were placed parallel to the street; one is a garage for collection cars and the last one, the “quincho” (covered grilling and entertainment area). Their exterior faces were used as solid closing to refuse to the west orientation.

Inside the three volumes are "sewed" by a cantilever slab that joins them, allowing the protected circulation outdoors, which does not blur its volumetric autonomy but it brings unity.

In the house’s volume, the resource we used was to penetrate and drill the block with green areas, which helps to organize spaces and simultaneously contributes to environmental quality.

The materials were carefully thought to contribute expressive quality to the big surfaces to cover and also obey the premise of low maintenance materials.

Inside, unpolished marble stands out as large plates, specially chosen at San Luis province (Argentina), starting in the entrance hall and go along with all linear circulation.

Almost all the flooring is made of engineered Slovenian oak wood; porcelain tile was used in service rooms. The concrete also intervenes in two large partitions that organize the public area of the house.

Despite its size, the home is introverted in its conception, being denied to the street but embracing a great inner park.

Perhaps its grandiloquence is subtly expressed in the quality of its materials, the purity of details and its respect to not disturbing the distinctive profile of a suburban residential neighborhood.