Fences, railings and more fences. This project designs a specific, impactful and elegant solution to their demise. This public space intervention by all measure is a success. A former storage room is now a library, people care for the space daily, older persons play chess and between free WiFi and various classes allowed the shelters and open spaces to improve the economic value of the apartments doubled.
– Clair Weisz.

The rehabilitation and recovery of the project's public space had an immediate impact on the safety of the area, activating a space that had been empty for decades. The space is unified by a square that seems to float on the ground, composed of permeable areas for existing trees and concrete areas that form bridges under the shade of light steel structures that provide shade while blending in among the trees. These gestures generate a feeling of spaciousness while offering places for small gatherings and individual activities. This urban design is as much about the resulting public space and the programs that did not exist before as it is about the design of a social process—all in a single project.

Read on for a description of the project by designers Rozana Montiell and Alin Vázquez Wallach.

In Mexico City, housing complexes are massive and more than 25% of the Mexican population lives in housing units: they are cities in their own right. Residents have a problem with social integration because they lack adequate public spaces. So, housing blocks are notorious for the barriers owners mount to define their homes' boundaries. COMMON-UNITY is an intervention done in the San Pablo Xalpa housing unit, which has approximately 7,000 inhabitants and is located in the north part of Mexico City. Contrary to belief, the use of barriers and fences increases feelings insecurity: protection becomes an obstacle.

When we arrived at Xalpa everything was gated, every single square was privatized, and of course, these bars could not be championed. The gates were to a certain extent “untouchable.” The barriers mounted by owners to define their limits, fragmented the landscape into passageways and corridors that pushed social life out of common areas. In fact, most of the neighbors did not even know each other.

We worked around the barriers created by the inhabitants in order to make them permeable, democratic and meaningful. One of our design strategies to reclaim privatized spaces for public use was to shift the vertical (railing, walls, gates, enclosures) which separate and divide for the horizontal (roof, shelter, floors, passageway) that connects, reunites, and encourages community interaction. The horizontal became more than just a roof: by expanding the program of potential activities in common areas through compact multi-functional structures, our COMMON-UNITY project gathered the community under the same roof.

The design of the new space spoke for itself: people willingly gave up 90% of the barriers. Rehabilitating public space restored the community’s use of it, transforming the UNIT into COMMON-UNITY. The recovered public space in Xalpa became an extension of each apartment, while it remained free to the public. The real-estate value of the apartments doubled: the apartments surrounding the rehabilitated areas acquired the added value of community life. Safety was achieved through design. Our intervention was aimed at placemaking: by expanding the program from the perspective of its temporal and multifunctional uses, we transformed the space into a place with identity and character. Placemaking is about understanding architecture as a social construction too.

See the project in full here. 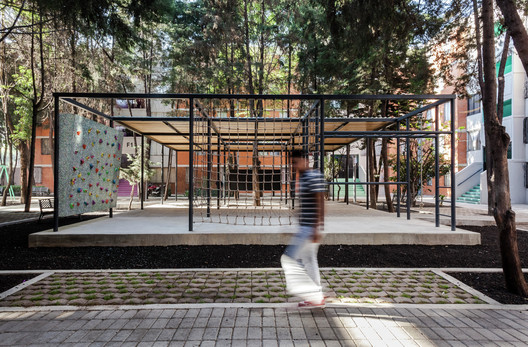