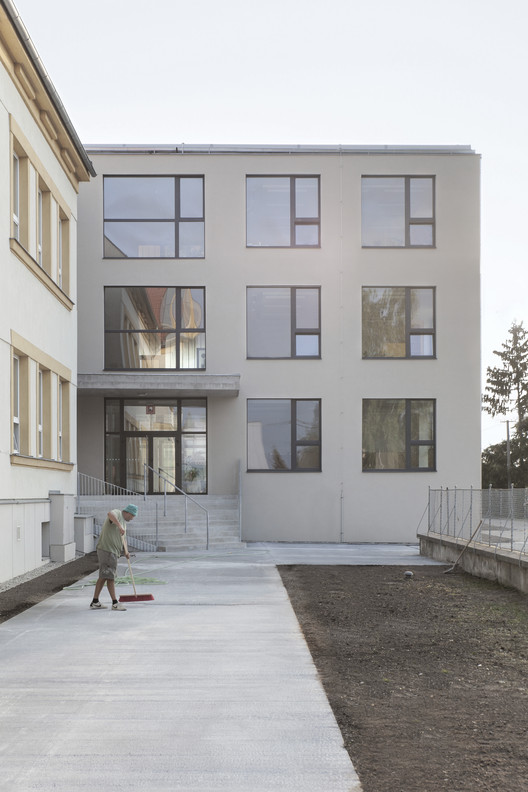 Text description provided by the architects. The maximal external volume of the house was determined before the start of the design. This limit defined the footprint, the maximum height of the building and the height of the individual floors, which are linked to the existing school building.
The requirement was to design a building containing classrooms, chill-out and communication spaces within this volumetric limit. The partition of the spaces was conducted with the smallest possible amount of architectural dividing elements - four rooms of each floor are separated by four walls, making it possible to avoid the corridors.

The central walls made out of full bricks have the function of load-bearing, spatially and acoustically separating and heat-accumulating. On the ground floor they have a thickness of 45 cm, on the upper floors due to a smaller load of 29 cm. In the place of their imaginary intersection, in the center of the house, these walls are not connected, which brings daylight into the center of the building and at the same time this "gaps" are used to enter the classrooms, whose positioning corresponds to their lighting needs an to the location of the blackboard/screen in the room. On the ground floor, these gaps are empty and underline the elementary architecture of four walls. The structural connection of all the walls is provided by the visible concrete slab which also allows for thermal accumulation.

An important point of the proposal was the deliberation of the form of the classrooms. There are four square classrooms in the extension offering a more versatile teaching arrangement, unlike the classical longitudinal classroom scheme lit from the left side. Square classrooms are double-lit; standardly from the left side, but also from the right side of the back, which brings a different type of illumination - non-directional and friendlier to the left-handed.

The new building is connected to the exiting one only on the northern side, so it is oriented to sunlit sides - south, east and west - a risky factor in relation to unwanted direct sunlight and related overheating of the building and classrooms. Classrooms on each floor are rotating around the sides. The Eastern Classroom is classically one side illuminated, direct sunlight falls only in the morning. The square classrooms are oriented to the southeast and southwest. Using outdoor shading together with double-sided illumination, the direction and intensity of light can be varied. The size and overall appearance of the windows combine several contradictory requirements; smaller windows would not allow sufficient light, larger glass areas would cause overheating.

Part of the architectural intention was to use solid, yet affordable, building materials to privide appropriate space canvas for children's activities. Full brick, reinforced concrete, profiled glass, natural linoleum and terrazzo tiles were used. The realization was carried out by a local construction company and by a large number of local craftsmen. 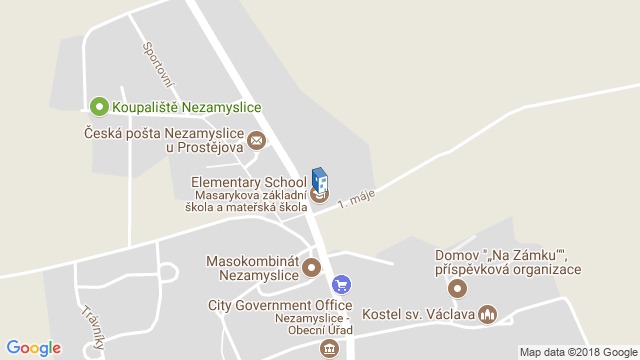 Location to be used only as a reference. It could indicate city/country but not exact address.
Share
Or
Copy
About this office
Malý Chmel
Office
•••