"Architecture is inhabited sculpture" is one of the phrases of the prestigious Romanian artist Constantin Brancusi. It has to do with one of the premises of the work philosophy of the architect Felipe Gonzalez Arzac, and the housing that we share in images.

The rationalist, modern and conceptual language materializes in this house, in the same way as the pure geometric forms. Precisely, there is an intention that the pedestrian see the house on its exterior as a sculptural object; that inhabited sculpture to which Brancusi referred.

There, a bucket of blunt concrete, its totally blind façade and its open sides give a particular visual impact, generating the sensation of being witnessing a completely dark house inside, closed, without much connection with the outside. However, it is the opposite effect that is generated when entering the house, which is decomposed and perforated almost entirely with a large courtyard as a compositional center, trigger circulation and central axis of its composition.

This game between exterior and interior and the decision to create internal patios is one of the hallmarks of this study, which also plays a leading role here: here, the interior, totally glazed, is linked to the exterior, seeking the dissolution of limits. In this sense, the house reveals a search and an intention of exploitation and spatial disintegration of the cube, which is dynamized from two axes that cross it in different hierarchies; a main competitive transversal axis that breaks with the static of the "concrete box", generating a lineal perspective to the infinite, articulated by the dining kitchen and the longitudinal table, the gallery, the concrete wall and the infinite linear sink that ends enhance this axis. Then, the house proposes another secondary transversal axis, in a direction parallel to the street, materialized with the lower wall that defines the access to the house. A separate paragraph in the conceptualization of this house deserve concrete and its value as plastic and malleable material, and glass, as a transparent material that opposes the imposing concrete box. Both create a home that generates two very opposite situations, one from the outside and a very different inside.

Thus, as a work of art, housing offers multiple looks, dissolved boundaries and a game visual where the architecture becomes that sculpture to be inhabited. 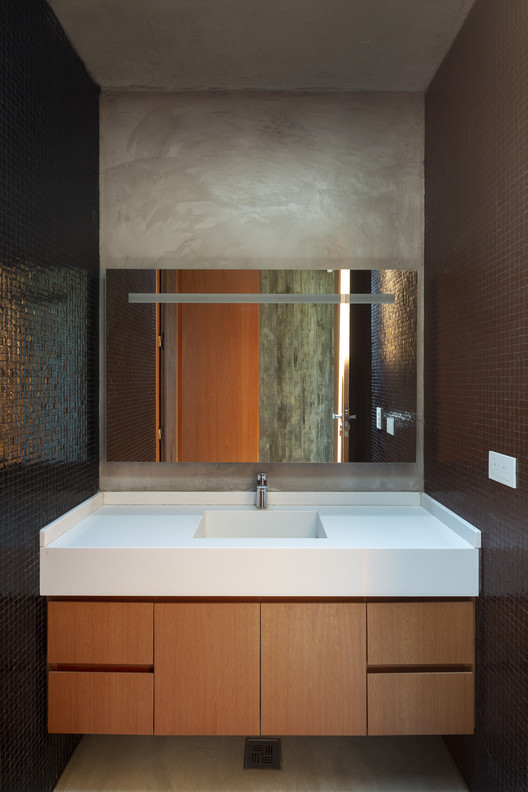