Save
Dutch Pavilion at 2018 Venice Biennale, WORK, BODY, LEISURE, to Address Automation and Its Spatial Implications
Presented by:

As part of our 2018 Venice Architecture Biennale coverage we present the proposal for the Dutch Pavilion. Below, the participants describe their contribution in their own words.

Het Nieuwe Instituut, the Netherland’s leading museum and scholarly institution focused on architecture, design and digital culture, will present WORK, BODY, LEISURE, the Dutch exhibition for “FREESPACE”, the 16th International Architecture Exhibition of La Biennale di Venezia. Commissioned by Het Nieuwe Instituut and curated by architect and researcher Marina Otero Verzier, the 2018 Dutch Pavilion exhibition addresses the spatial configurations, living conditions and notions of the human body provoked by disruptive changes in contemporary labor ethos and conditions. The project seeks to foster new modes of creativity and responsibility within the architectural field in response to emerging technologies of automation.

FROM NEW BABYLON TO ROTTERDAM HARBOR

The Netherlands has a rich history of investigating labor and the potential for it to be reimagined. As a point of departure, the Dutch architect and artist Constant Nieuwenhuys’ explored an architectural paradigm of free space and leisure afforded by automation in New Babylon (1956–74). Nieuwenhuys envisioned a society that devotes its energy to creativity and play, and individuals can design their own environments. In a 1980 lecture, Nieuwenhuys declared, “automation is a material condition and achievable.”

More than thirty years later, an architecture of full automation is being implemented in the city of Rotterdam, from the self-managed logistical infrastructures of the port to the logic and relations that define the physical and social landscape of the city, and across agricultural clusters in the Netherlands. Reflecting on a spectrum of theoretical viewpoints, including Nieuwenhuys’ initial proposal in New Babylon for a leisure-oriented society liberated from the bondage of labor; the recent techno-optimistic premise that full automation will bring increasing bounty and luxury; and the dystopian forecast of rampant, machine-abetted human unemployment and inequality, WORK, BODY, LEISURE posits that these visions are already shaping contemporary labor structures and, ultimately, our capacity to redesign them according to a different set of ethical principles.

WORK, BODY, LESIURE builds upon Automated Landscapes, a long-term collaborative research initiative on the implications of automation for the built environment, launched by Het Nieuwe Instituut in 2017.

Curator Marina Otero Verzier has invited a group of architects, designers, historians and theorists, whose work is a reference for a critical understanding of emerging technologies of automation, and their spatial implications. Each of the contributors will conceive an intervention as part of the collective exhibition and will be in dialogue with the projects developed as part of the extended program.

Curator and radio host Amal Alhaag in collaboration with The Research Center for Material Culture (RCMC), addresses technologies of the body and how these are informed by the concept of the cyborg, enslaved and ethnographic body. Architectural historian and theorist Beatriz Colomina re-examines the bed as a unique horizontal architecture in the age of social media, and will look at its use as a workspace that transforms labor. Architects and researchers Marten Kuijpers and Victor Muñoz Sanz explore the architecture of full automation in the city of Rotterdam and across agricultural clusters in the Netherlands, jointly with Het Nieuwe Instituut and TU Delft. Designer and researcher Simone C. Niquille unravels the parameters embedded in design software shaping contemporary work spaces and bodies optimised for efficiency, ergonomics and human/machine interactions. Finally, architecture historian and theorist Mark Wigley, revisits New Babylon and discuss its proposal for an alternate architecture and an alternate society in which human labor is rendered superfluous. 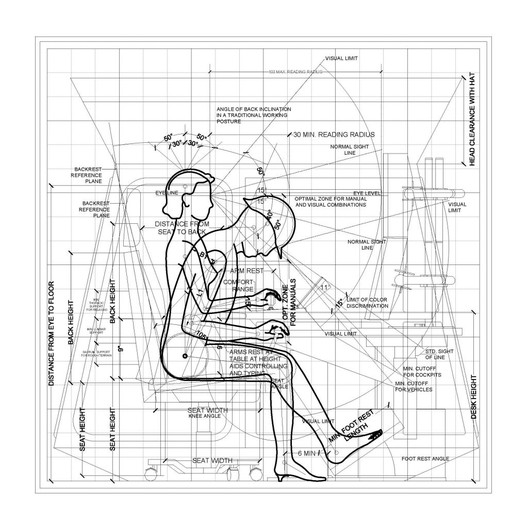