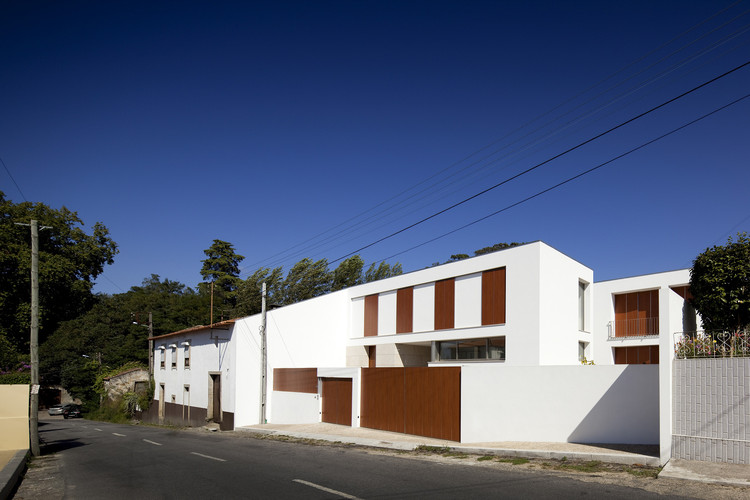 The presented project was originated from the transformation of a place that it maintains a rural identity that derives from the surrounding environment. The land presented two pre-existences: one building that faced the street and one threshing-floor built in stone that was implanted in the moment of the land’s torsion and quotes transition. The volume facing the street was demolished in order to guarantee the distance of the street and the threshing-floor house was demolished because it presented an advanced state of degradation. In the surroundings of the land, from the South and the North, there were exposed the backyards neglected by the neighbourhood. Since the beginning, there was the need of recreate a place by working with the place’s memory, resolving simultaneously the contacts of the new intervention with the surrounding buildings, putting together a perimeter closed in itself.

The project attitude derived from an interpretation of the history and the place looking for spaces with real character that could adapt to the demanding of the contemporary life. There was the need to find a solution that could empower the use of some traditional materials, carefully harmonized with the intent of providing distinguished emotions and notions.

The concept of the project focused on the idea of looking for a space experience in which the spaces work as a prolonging of the human being, protecting the human expectative towards the presented proposal. This proposal had to be a container of real life, the costumer’s life. The house of ASSIS shows us the expression of an idea in a unique space moment, when we use the work throughout a sensorial course, distributed to serve the functional programme.

The form and its meaning

Taking advantage of the land’s proprieties and the context in which it is, it has become obvious that there would be the need to create a scenery for the house, withholding the neighbourly backyards and aligning the two main volumes of the house with the street as to unifying that place, thus creating one volume more public in dialogue with the farmer’s house. This first volume presents an independent access entrance to an office, allowing the work at home without invading a place that was made to be intimate. It also contains the kitchen on the lower floor and the parent’s suite on the upper floor. In the upper floor there are the children’s bedrooms. Both volumes are connected by a glass bridge thus allowing moments of space decompression and visual see-through with a guaranty of privacy.

The entrance was a central theme of the project that was raised though an inner-street that connects all the land with a clear notion of course. In the first moment of the entrance in the land, a tunnel surrounds us and a wall of granite lead us to the house entrance, which is the (re)interpretation of the threshing-floor house that is in the same place and it works as a hinge moment between distinct quotes and land’s orientations. It was sought that this place of transition was both fluid and domestic. Since the entrance to a house is also made through a car way, the garage had an equally carefully planning where the natural light had to exist, culminating in the access stairway to the lobby.

The access to the limit of the land by a ramp is made by a pergola that gives rhythm to the course and culminates in the leftover functions that equip the second garden to the high quote.

Contextualization of the building in the architectural context

A project’s house is the accomplishment of a dream which is to have a house to which we can relate. It is precisely thinking of the accomplishment of dreams that the role of the Architect reveals an extreme importance, for he is the one that has to make the accurate interpretation of a client’s dreams, sometimes confuse, that reveal the true essence of each person and the way that they would like to experience their space. This process of decoding a dream wasn’t understood as a limitation to the creative freedom of the architects. On the contrary, it was understood as a combining course which lead to exquisite discoveries, including the authors while young professionals.

For us, architecture can’t be seen as wealth of quick consumption and that is was it separates from the design’s discipline. The search for values that has something of immortal and everlasting like those who belong to the history of the place is the base of our architecture. This way there was the concerning of finding beauty in showing simple things, in a personal belief that the architecture begins when the need ends. The search for beauty in the architecture is what it confers the everlasting character, not overvalued by the novelty, but always looking for a permanency value.